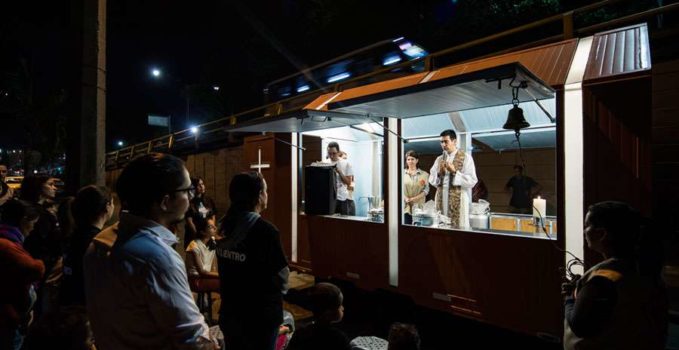 A chapel on wheels

Juan Felipe Escobar is a Colombian priest who has served the street people from Medellín since 2005. His quiet labor of solidarity now reaches more people through the “Tent of Encounter,” a chapel on wheels, which has been in use for more than a year. —

Fr. Escobar has been the pastor of the Blessed Federico Ozanam Parish in the Enciso neighborhood for several months. Every Tuesday, he goes out with his chapel on wheels to the center of Medellín to announce the Gospel to street peddlers, drug addicts, prostitutes, indigents, and displaced indigenous.

“The idea came about because I began to exchange weapons for food or clothes with them. Some volunteers told me that it was very risky to do this, so then I began to search for a vehicle to carry out the exchange. The idea of making a chapel emerged, but that was very expensive,” the priest related to ACI Prensa.

In 2012, he gave up the idea, but in 2016, “a volunteer told him that she had a nephew who was an architect. He and a partner helped me to carry out the project,” Fr. Escobar explained. 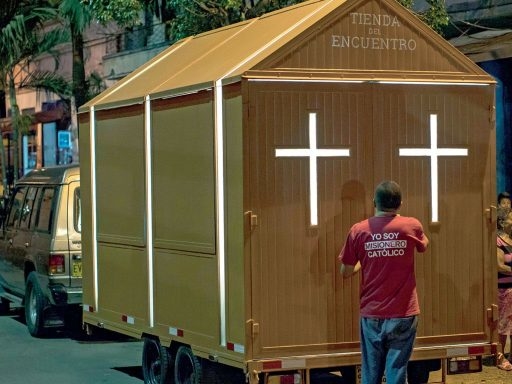 The priest has the help of approximately thirty volunteers, there are the faithful from different parishes along with seminarians, together they distribute 2,000 pieces of bread and chocolate to about 500 people per week.

“We reach the people through songs and music, the Blessed Sacrament is exposed, the Gospel for the next Sunday is read, and there is a brief reflection. After a song, some litanies to the Blessed, I give a blessing with the Eucharist,” he said.

After this spiritual moment, “the chocolate and bread are distributed.” “Our aim is spiritual, which is the encounter with Jesus. Listening to them, calling them by name, embracing them, telling them to leave the streets, to seek rehabilitation centers, and counseling,” the priest told ACI Prensa.

Fr. Escobar was also a formator in the Medellín Major Seminary from 2010 to 2018, he said that at the end of the day, “The volunteers and I who go are evangelized by the street people, they evangelize us. They also pray when they take the microphone, they pray with what is in the depth of their heart.”

The Encounter Tent goes to five areas of the city: the upper and lower part of Miquitao, the area known as Forty, the Metro Prado Centro station, and León de Q Greiff Avenue. Crime pervades in this last place and the priest offers food or clothes in exchange for weapons.

Fr. Escobar said that the “Encounter Tent” is in accord “with Pope Francis’ Church reaching out, of going out to seek the people. Thus, we have this chapel on wheels.

The Street people “…are great believers in God. Despite the suffering, almost all of them believe in God. They tell us ‘may God reward you,’ ‘may God bless you.’ We see the presence of God’s love,” he affirmed.

He also concluded, the street people that we serve “give flavor to reflection. We do not notice creed. When we help, we do not exclude anyone.”

The mobile chapel is a project of architects: Tomás Vega Trujillo and Camilo Ramírez Gallego that had the collaboration of the Obras and Montajes (a Construction and Assembly) company.

According to the Universidad Pontificia Bolivariana (UPB) website in Medellín, the school of Architecture project was awarded first place in the ephemeral and interiors category at the Colombian Biennial Architecture and Urbanism.

Camilo Ramírez said, with this project, “The equation is changed, and we do not wait for people to come, but instead, it is the Church who reaches the people. Basically this is the purpose of the project.”

Upon presenting the design, “a very interesting process began which we made a part of all the development, and we were very interested in getting involved from the beginning. We came to understand that the relationship with the priest was not only that of client-architect, but we became involved in making this project a reality,” said Tomás Vega for his part.

Who knows…someday we may have real “Pilgrim Shrines” on wheels, to the peripheries of our world…