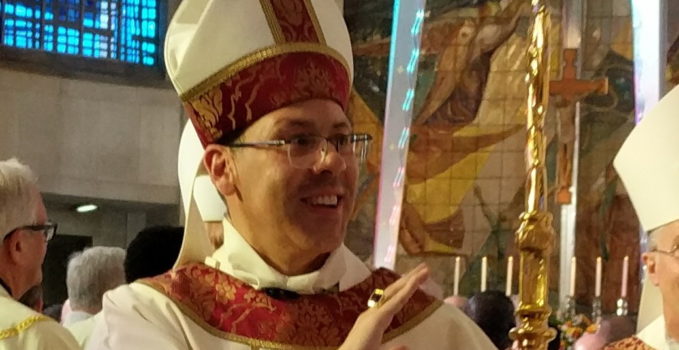 With a special hymn during his consecration, Hartford has a new Schoenstatt Bishop

Fr. Juan Miguel Betancourt Torres was ordained a bishop for the Archdiocese of Hartford, Connecticut, 18 October  2018 at its Cathedral of St. Joseph. And during the celebration, by Ezequiel Menendez’, the music Director of the Archdiocese of Hartford, CT, initiative and thanks some German, Argentinean and Italian members of the Schoenstatt.org team’s collaboration, a song very dear to him and so many Schoenstatt members resounded in the Cathedral: Maria de la Alianza…. —

It was announced on September 18 at the Vatican that His Holiness, Pope Francis, had appointed him as Auxiliary Bishop of Hartford. The Bishop-elect was ordained a priest on 21 April 2001. He  served at this moment on the faculty of St. Paul Seminary School of Divinity in St. Paul, Minnesota, as Vice Rector of Formation, Associate Academic Dean and Assistant Professor of Sacred Scripture. He was also the Pastor of the Church of St. Francis de Sales of St. Paul in St. Paul, Minnesota.

“I feel honored and very grateful for the Lord’s call to serve the people of the Archdiocese of Hartford, under the pastoral and fatherly care of Archbishop Leonard P. Blair, with all my heart,” Bishop-elect Betancourt said in advance of the announcement.

Bishop-elect Betancourt is a member of the Society of the Servants of the Eucharist and Mary (Esclavos de la Eucaristia y de Maria Virgen), which he joined after graduation from college. He presently serves as Vicar General of the community. It is a contemplative community founded in Puerto Rico centered on Eucharistic adoration and Marian consecration, and is part of the International Schoenstatt Movement.

Music in the nick of time

And this is where Ezequiel Menendez comes in: On 4 October 2018, he wrote an email to schoenstatt.org asking for help: “We are about to ordain a new Bishop, Bishop Elect Betancourt. He is involved in Schoenstatt. I am looking for a hymn, song or any piece from Schoenstatt that could be included in the Ordination Mass. Is there a song you could send me (sheet music)?” A few emails more, and it became clear, that Ezequiel Menedez, a native Argentinean, would prefer a Spanish piece for a native Puerto Rican bishop… Text and chords to “Maria de la Alianza” were sent from Argentina, the music sheets came from Pamela Fabiano in Rome – all in time for the ordination on October 18.

“Behold the Lamb of God…”

In making the appointment of Father Juan Miguel Betancourt public, Archbishop Blair of Hartford said that: “Coming as it does on the eve of the 175th anniversary of the Archdiocese in November, the appointment of Father Betancourt is a cause of rejoicing not only for me personally, but for all our clergy, religious, and laity. For me and for our clergy it means the welcome arrival of a dedicated co-worker in the Lord’s vineyard who brings a variety of talents and experience to our shared ministry. For the laity of the Archdiocese in all its present-day diversity, Fr. Betancourt’s Hispanic/Latino heritage will only enhance the pastoral care that he will exercise for the good of everyone of every race and ethnicity. For those in religious life, Fr. Betancourt’s membership in the Society of the Servants of the Eucharist and Mary only serves to underscore the value and contribution that consecrated religious men and women make for the good of the Church.”

Among well wishers at his ordination Mass were men from his sixteen-member contemplative religious community, Servants of the Holy Eucharist and the Blessed Virgin Mary, which was founded in Puerto Rico in 1981 with houses in the U.S. and Spain.

“It’s a real pleasure to be here for this joyful occasion,” said Bishop Daniel Fernandez of Arecibo, Puerto Rico, who traveled to attend the liturgy with Bishop Roberto González of San Juan, Puerto Rico. “It’s a real source of pride that one of our island’s sons has been called to this service.”

Bishop Betancourt chose the phrase “Ecce Agnus Dei,” or “Behold the Lamb of God,” for his motto. For his episcopal coat of arms, he chose symbols signifying the Lamb giving his life for the Church, his new local church of Hartford and former church in Minnesota, his home community in Puerto Rico, the spirituality of his religious community, his call as a successor of the apostles, and the strong presence of the Blessed Mother in his life. 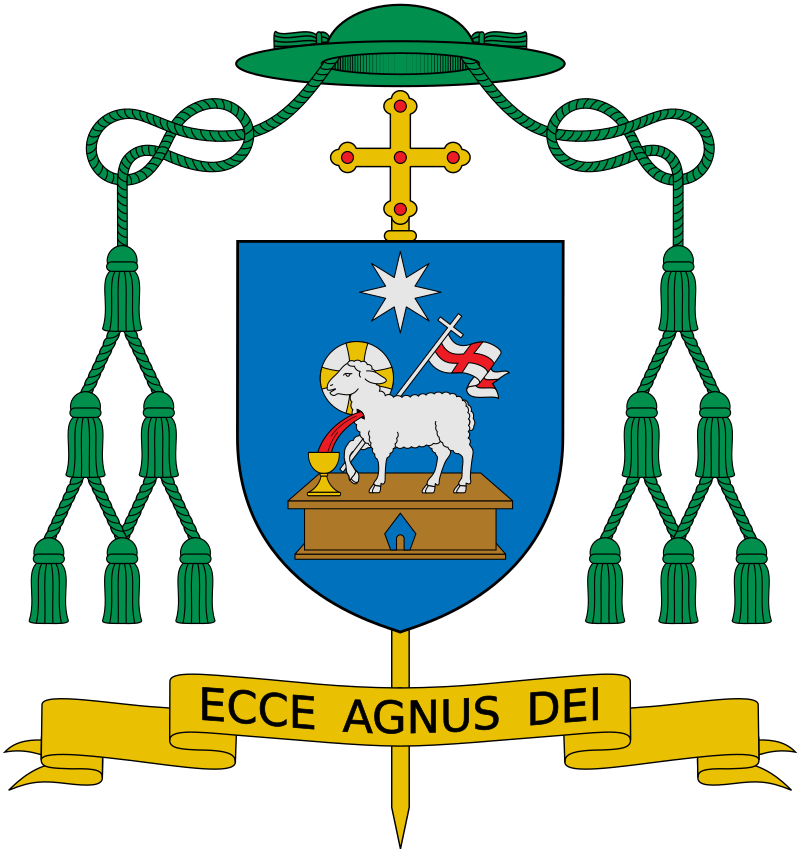 “I am going to serve this Church.”

At the conclusion of the Mass, he thanked the many people who supported him over the years, as well as the faithful in attendance. He quipped that he already was going to work the next day by officiating at two confirmations.

“I received a lot of support today not only from my family, the bishops, and my seminarians, but from everybody,” he said. “The theme that is constant here is that I’m going to serve this Church.”