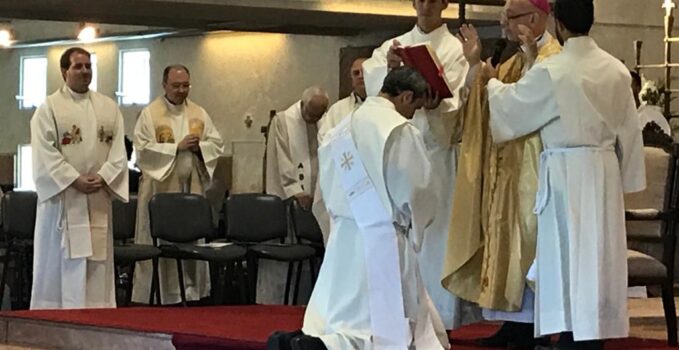 “What work did you just do, and what did Jesus say to you? He found you at your table, with your nets, in your things. To your surprise and the surprise of many, his voice resounded in your soul: “Pancho, follow me; and here you are,” said Bishop Francisco Pistilli of Encarnación in the homily for the ordination of Francisco Maria Bosch on Saturday, November 23, 2019 in Nuevo Schoenstatt, Florencio Varela.  —

The Church of God the Father in Nuevo Schoenstatt was filled to the brim with members of the Schoenstatt Family of San Isidro, from which Pancho originated, and the other communities of the Buenos Aires region, the Sisters of Mary and many others who came from afar. Among the more than twenty priests was Father Pablo Pol, Rector of the Original Shrine, who had come from Germany, and seminarians and friars who had come from Chile. 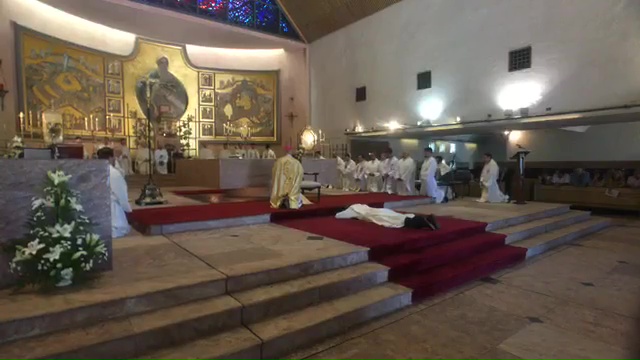 Many tell them about Christ, but they must see Christ.

Bishop Pistilli was Pancho’s novice master and then, during his studies, his community superior. Like at Cristian Rodríguez Robles Terán’s ordination two weeks ago, his homily had the tone of a shepherd who knows each of his sheep very well. At one moment he said: “The “follow me” is connected to the “go”. Go, proclaim the Gospel, make new disciples. (…) If there are few vocations, it is not because young people do not seek or desire the call. They sit at their tables or entangle themselves in their nets and wait for this special call. This connection of deep compassion connects with their hungry souls. Many tell them about Christ in the third person as a past hero or expose them to a teaching to which they must submit their mind and will. They are presented with a Christ who is sometimes institutionalized, stiff, standardized, sometimes ideologically tuned or hermeneutically framed in a partial Christology, sometimes formatted in rubrics or alienated in emotional montages of exaggerated sensitivity. But they must see Christ.

Remember that, dear Pancho. One must teach like Jesus. His word must echo in your words with authenticity. His message must come in humility and truth to unite the flock in one heart and one faith. We do not proclaim ourselves, but the One who is Way, Truth and Life”. 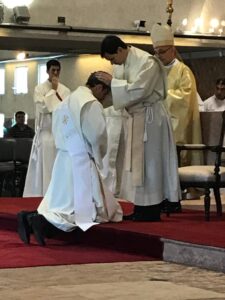 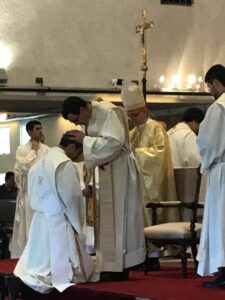 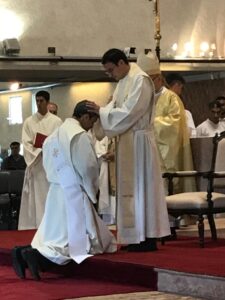 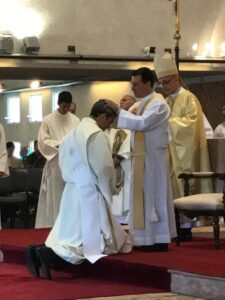 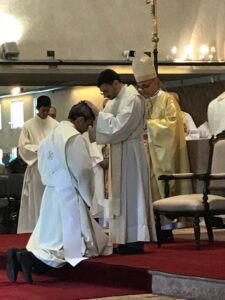 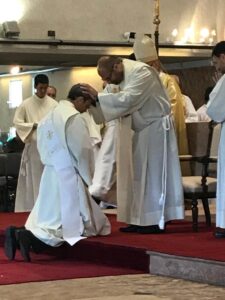 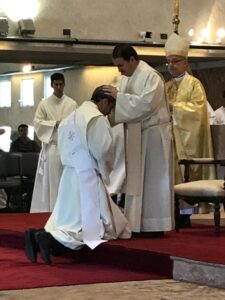 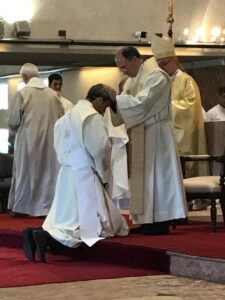 Laying on of hands – as since the times of the apostles

After the litanies intoned with Latin American folk rhythms and the invocation of the Holy Spirit, Bishop Pistilli laid his hands on him, and then all the priests present made the same gesture that has been repeated since the first apostles in the Church.

After receiving the priestly vestments, the congregation was finally able to express its joy about a new Schoenstatt priest and the Church in a long and firm applause.

Then Father Francisco Maria Bosch was taken to the altar to transform bread and wine into the body and blood of Christ for the first time. 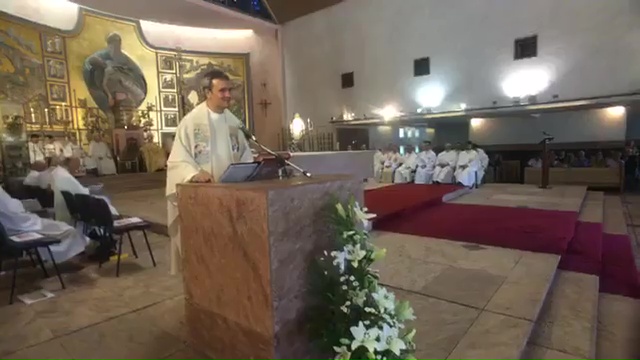 Thanks for all the gifts

At the end of the celebration, Father Pancho, in his thanksgiving, made a journey through his life to mention all the people who touched his life on the way to the priesthood. “God gave me many gifts. Thank God, good Father, because I first encountered you with my family.

Thank you, good father, for my friends in school. Through them I got to know Schoenstatt. By living the faith with them, I discovered the invitation of Jesus to follow him.

He continued to thank the Boys’ Youth, Father Pablo Pol, and he did so in a special way to Bishop Francisco the Paï, “thanks to you I am a priest today, thank you for having been such a father for us”. He also thanked his course brothers and the Schoenstatt Fathers for welcoming him to the community of Sion and many others who accompanied him during all the years of preparation for the priesthood. 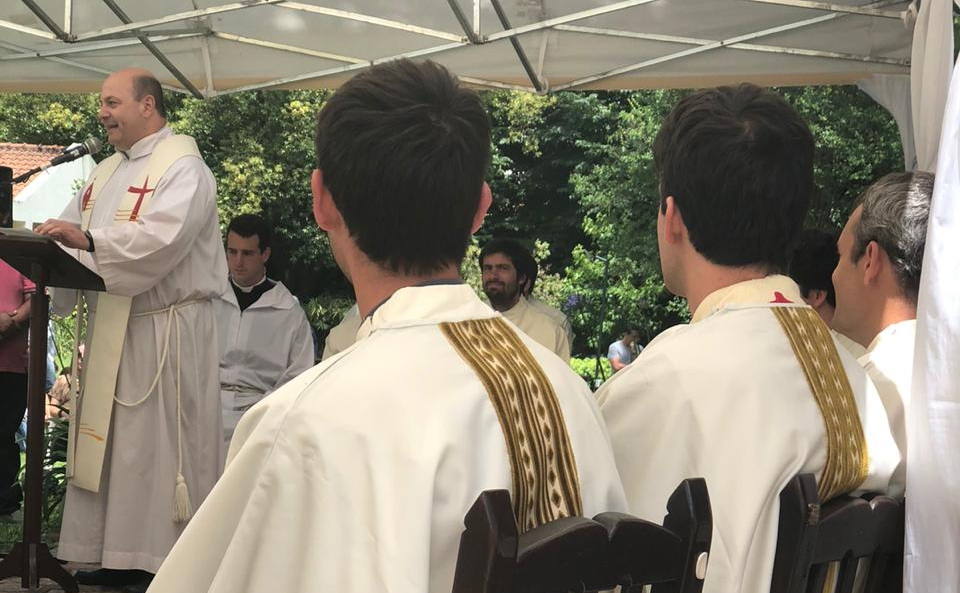 First Mass in the Shrine in San Isidro. The sermon was given by Fr. Pablo Pol.

Mary, the best teacher of priests

At the end of his message, Bishop Pistilli spoke more personally with Father Francisco: “Dear Pancho: Like in rugby, we form a team. Good players admire each other and are inspired by imitating the good example of other players. In your novitiate I wrote: ‘I admire his simplicity, his sportsmanship, his clear and positive attitude to life, I admire the humility that the Blessed Mother awakens in him and makes him grow. He has joy in his heart’. Keep growing to encourage many to follow Christ. All our lives we are acolytes, servants, in the same team, (…) always good, happy, humble, free, simple and strong, as the best teacher of the holy priests teaches us: “Mary”.

Francisco then went to her, the queen of his heart, to consecrate his priesthood to her, Mary, in the newly renovated Father Shrine. Then everyone could greet him and share an agape in the hall under the church.

The next day, Father Francisco María Bosch celebrated his first Mass in the Shrine of San Isidro, the place where all this priestly history began. Father Pablo Pol, Rector of the Original Shrine, preached and stressed the key moments on the way of the new priest:

“When I was asked last year to go to ministry in Germany, I had many open questions, but only one certainty: today I wanted to be here and God (and the community) allowed me to be here.It is not the first time I have been asked to preach at a primiz. That doesn’t make it easier, nor does it take away all the inner emotions and responsibilities that it means. Each of these occasions was an opportunity for me to thank God for the journey that had been made and to give me this grace of “witness”: to see the miracles that happened in the human heart before Jesus’ call: “Pancho: follow me”. 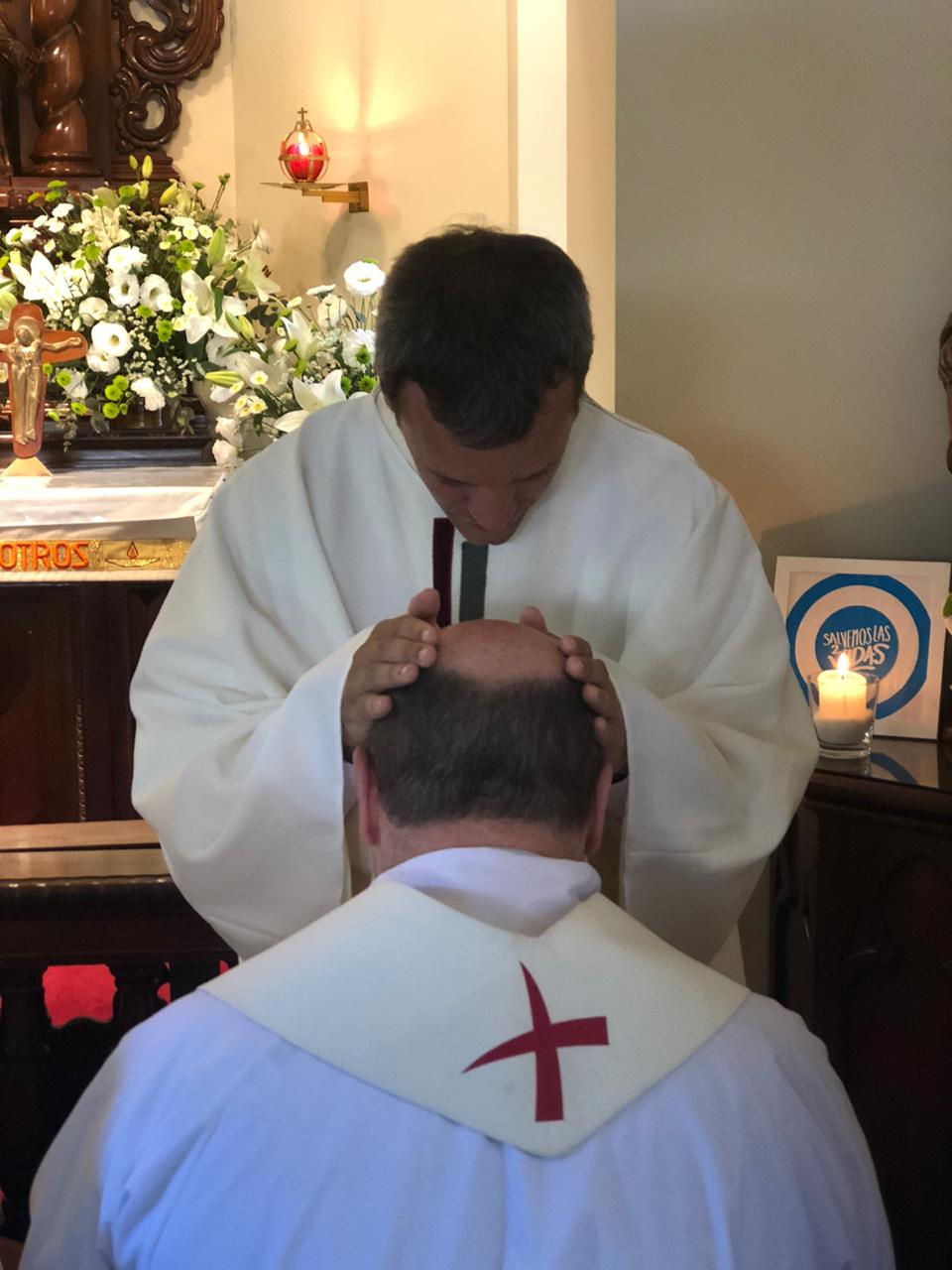 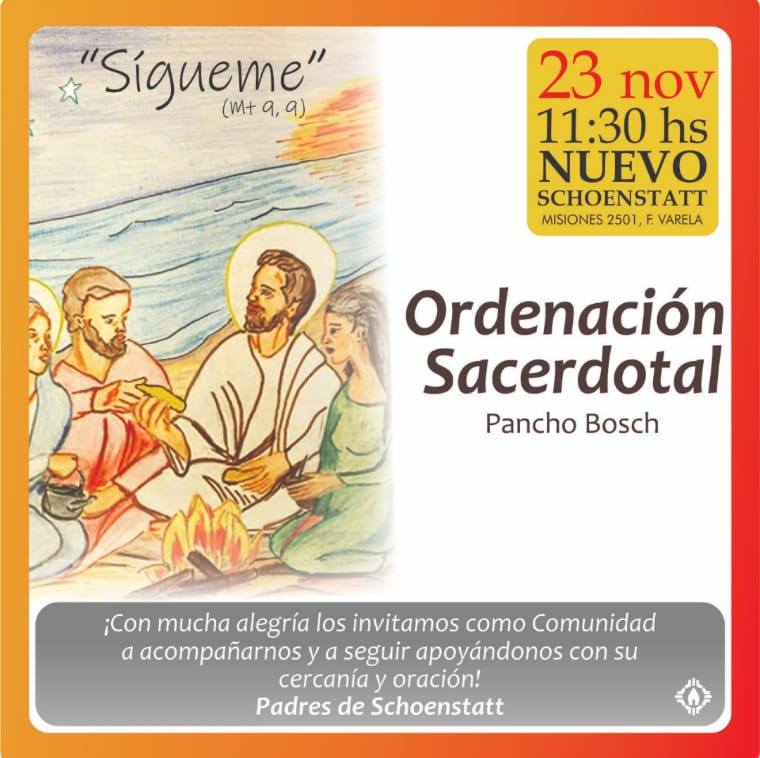