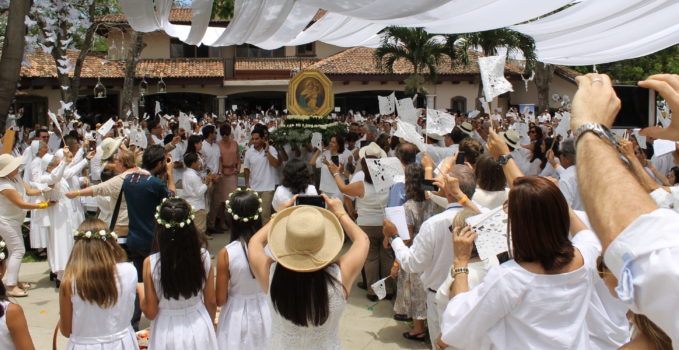 Mary comes to her Shrine…she couldn’t wait any longer

She came. The Blessed Mother came to her Shrine. Hundreds of hands holding little white flags were raised as Mary, the Mother of the Lord and our Mother, slowly approached on the road leading to the Shrine in her picture on the platform decorated with hundreds of white flowers, which was carried on the shoulders of founding generation. The San José choir sang with all its heart and soul. Many hug, many cannot contain the tears. All the desires, struggles, giving of self, commitments, all the waiting and all the love of almost twenty years are condensed during these moments of the Blessed Mother’s pilgrimage through the lines of her family from Costa Rica, her family of hope and their guests from Central America and so many other countries. She came. She finally came. Her family could no longer wait and neither could she. They rang the Shrine’s bell. The Covenant of Love was seen, heard, touched. Everything was a celebration beneath the blue sky and a sea of white, which was the color for the celebration. It is real. She came. She is here. The picture was presented to the Archbishop of San José, José Rafael Quirós Quirós, who raised it on high and showed the Blessed Mother to everyone. The Apostles of Mary threw thousands of rose petals…It was a moment that should have lasted forever…It was a good thing that there were so many photos and videos, because the teary eyes were unable to see how the Archbishop, accompanied by the priests and some photographers, carried the picture to the Shrine, where in the tabernacle, Jesus was already waiting for his beloved Mother.  Fr. José Luis Correa placed the picture in its place on the altar. With the right hand pointed toward the Shrine, everyone renewed their Covenant of Love: “My Queen, my mother, I give myself entirely to you…guard me and defend me as your property and possession…” for the first time in and around the Shrine of Costa Rica, the first Shrine of Central America.

There was emotion, joy, gratitude and commitment. As of now, we want to do everything so that from these roads to the Shrine, graces will flow outward to the city of San José, to all of Costa Rica, to all of Central America and beyond. Family of Hope… the time has come. Since Costa Rica has its Shrine, its “greatest apostolic work” (Founding Document, 10/18/14). 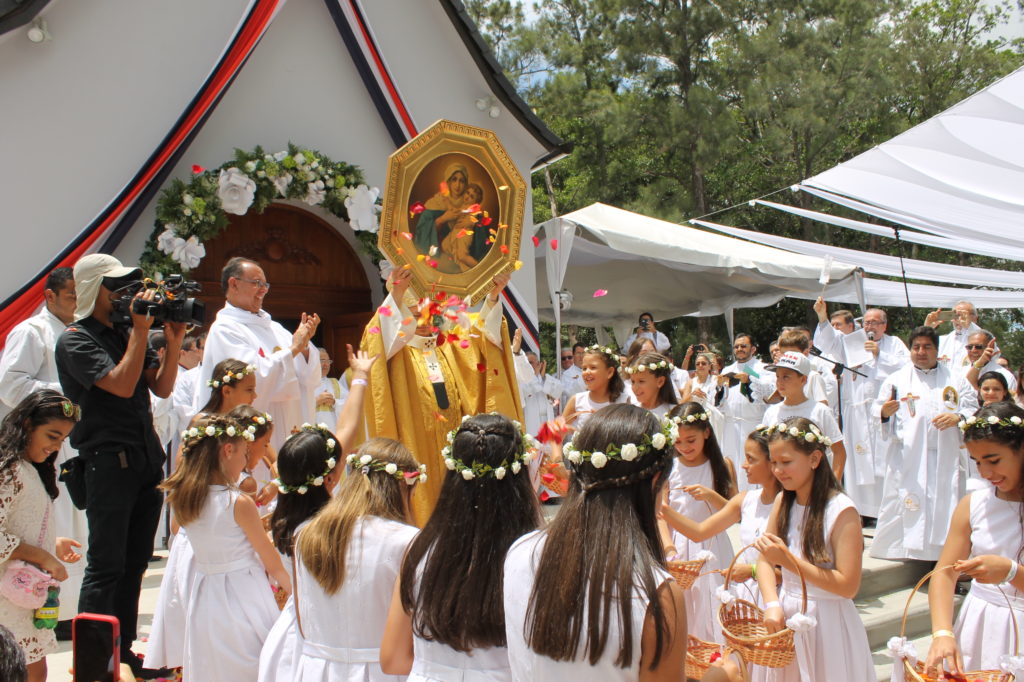 United in the same love, the same covenant

At 8.00 a.m., the doors to the grounds were opened. A large Schoenstatt flag floated in the strong and refreshing breeze. Even the weather was a celebration, with some clouds and a breeze that provided moments of respite beneath the sun and the heat that is typical of Costa Rica. The logistic part of the blessing celebration was entrusted to a specialized business, which gave the members of the Schoenstatt Family time to welcome the pilgrims and to make them feel at home, as soon as they entered the grounds. They were spoiled like favorite children of a generous and loving Mother. Children distributed the little white flags, everyone received a credential, a hat, and a small program booklet. They were invited to the bookstore, several priests were available to hear confessions, the entire grounds were clothed in white with pavilions covering a large part of grounds; there were, white chairs, butterfly decorations, shrines, balloons, flowers… According to the custom for Covenant of Love celebrations, all the guests were dressed in beige and white. “Everyone is a part of the celebration, everyone decorates the Blessed Mother’s grounds,” explained Michell Ramírez, from the press team. The grounds were filled rapidly with people who came from many nations, united in the same love, in the same covenant, in a single joy. Pure life. 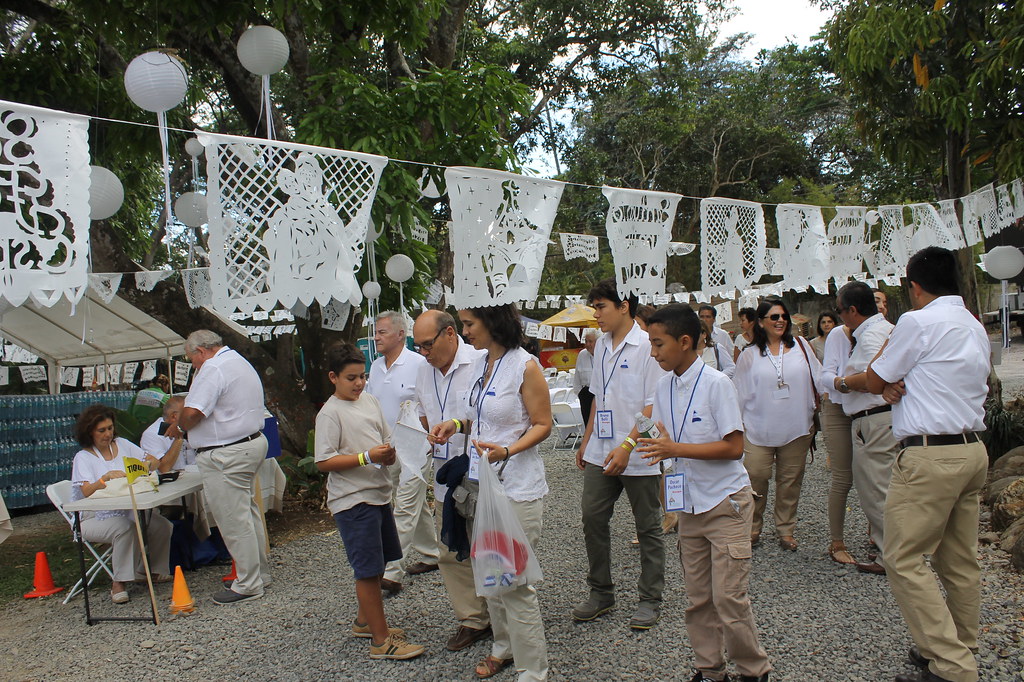 A new greeting: “Welcome to the Shrine”

Fr. Carlos Cox from Chile, Costa Rica’s first adviser, along with some members of the Schoenstatt Family from Costa Rica emceed throughout the day, once again introducing the new greeting now valid as of that day:  “Welcome to the Shrine.”

The delegations from the countries such as the representatives of CIEES (International  Community of Schoenstatt Businessmen and Executives), who came from Peru and Chile, as well as special guests, among them Pilar and Luis Jensen from Chile, four Sisters of Mary from Chile and Ecuador, Rosa María and Josef Wieland (Leaders of the International Family Federation), and Maria Fischer from schoenstatt.org had reserved seats.

There were many greetings, encounters and re-encounters before the celebration began. Missionaries from Panama recalled their visits to Belmonte Rome in 2004 and to the Original Shrine in 2011, two members of Schoenstatt Radio from Esquipulas, Guatemala, spoke enthusiastically about their apostolic work.

A young mother, with her 2-year-old daughter in her arms, could not contain the tears, when she saw the Shrine, decorated with the Costa Rican flag and with an arch of white flowers over the door, which was still closed. “I belonged to the first group of Girls’ Youths,” she said, and she looked for photos on her cell phone of those first youth gatherings with the great dream, the dream of Schoenstatt in Costa Rica. “After I married, we belonged to the first couples’ group. We always desired…” her voice broke. “…And now it exists. And when my daughter is a couple of years older, she already will have the Shrine and the Schoenstatt that we only dreamed.” She had a big smile and tears in her eyes.

“We are part of the founding generation,” the youths of the Girls Youths of today proclaimed with their t-shirts. Here in Costa Rica everyone is a founder. It is felt in every word, every gesture, every face. Family of Hope welcome to your Shrine.

The time arrived. Delegations from the neighboring countries, CIEES, the Branches, Communities, coordinators and the real founders carried the Schoenstatt flag. The Holy Mass began with the entrance of the two bishops – José Rafael Quirós Quirós, Archbishop of San José, accompanied by Bishop Ángel San Casimiro Fernández O.A.R, Bishop of Alajuela, and the Mass ended with the blessing of the Shrine. 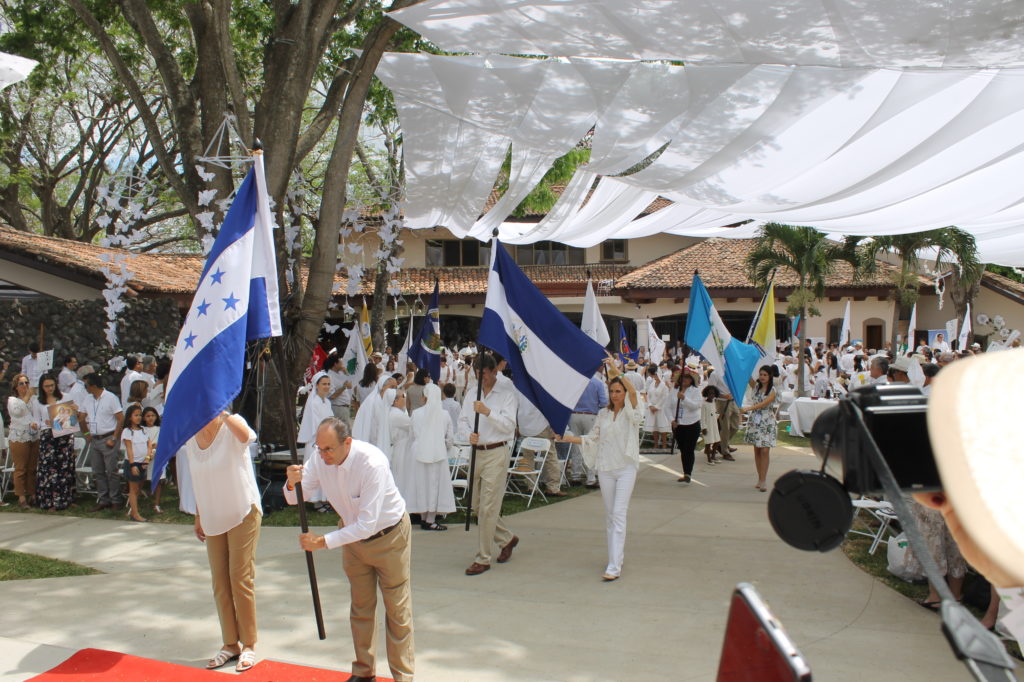 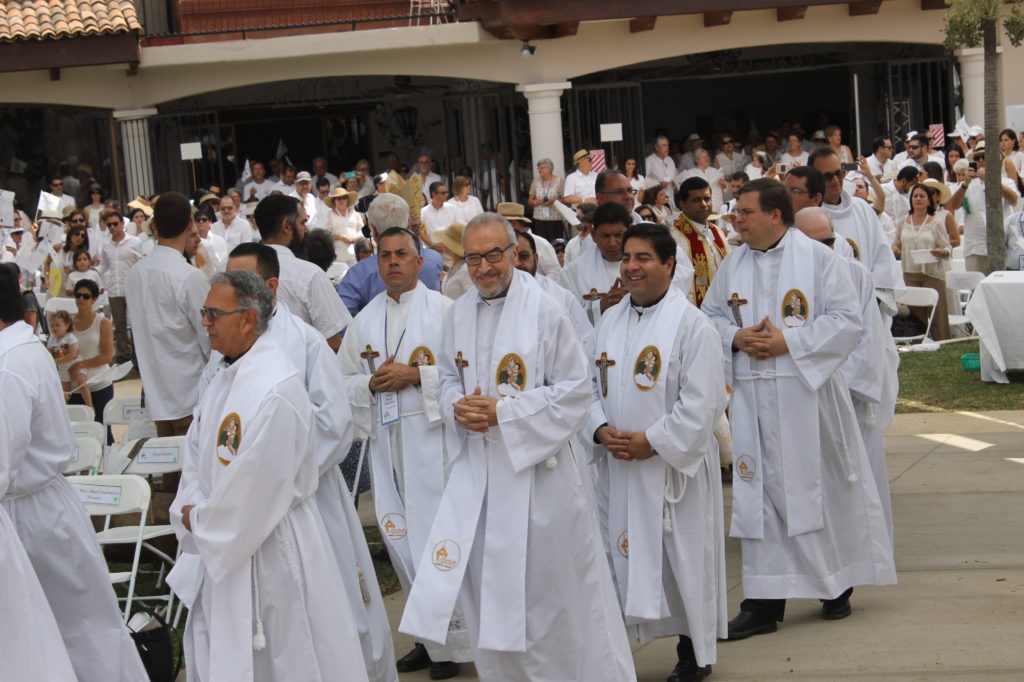 As of today, we begin to write a new page of the Church’s history in Costa Rica

Visibly emotional, Ileana and Gonzalo Vega greeted the Archbishop, the Diocesan Priests, the Schoenstatt Fathers, the Sisters of Mary, guests from fourteen countries and everyone present. “As of today, we begin to write a new page of the Church’s history in Costa Rica,” they said, “where all of us are protagonists, because we want to be a family of hope doing good for the heart and soul of the people… For twenty years, we have carried out the dream of building this family in order to build this Shrine, and this founding generation, which is all of you…accomplished it.”

Costa Rica’s typical cart in front of the Shrine was the sign of everything that was contributed in the “Nothing with us.” It was filled with symbols of the contributions to the capital of grace, in prayers, work, sacrifices, and yes, also monetary capital to pay for the land, the construction and the celebration…The cart…Mary’s triumphant carriage for which Fr. Kentenich came to Latin American to seek allies – has accompanied the Schoenstatt Family from Costa Rica for almost twenty years in their desire for a Shrine. It was filled to the brim; it reached its goal: the Shrine.

Cardinal Francisco Javier Errázuriz shared the greeting from the Holy Father’s council of cardinals, one of the hundreds of greetings that arrived from all parts of the world before and during this day: “Building the Family of Hope with the grace of God, they are answering our founder’s invitation, who shortly before he departed for the eternal homeland, proposed that we live ‘with hope and joy confident in the victory we go with Mary into the newest times,’ (Heavenwards, p.179). In the same way, they assumed beloved Pope Francis’ invitation that he addressed to us week by week.

The liturgy followed, accompanied by the San José choir, which was formed for this celebration. The repertoire included the most beloved songs of the Latin American Church and Schoenstatt, which enveloped everything and everyone with joyful songs.

In his homily, departing from the readings of the day, Bishop José Rafael Quirós Quirós asked that this Shrine and this family always be at the service of the Church and their parishes with their charism, and where the needs of the people show them where to go with their commitment and their involvement in the evangelizing mission of the Church. 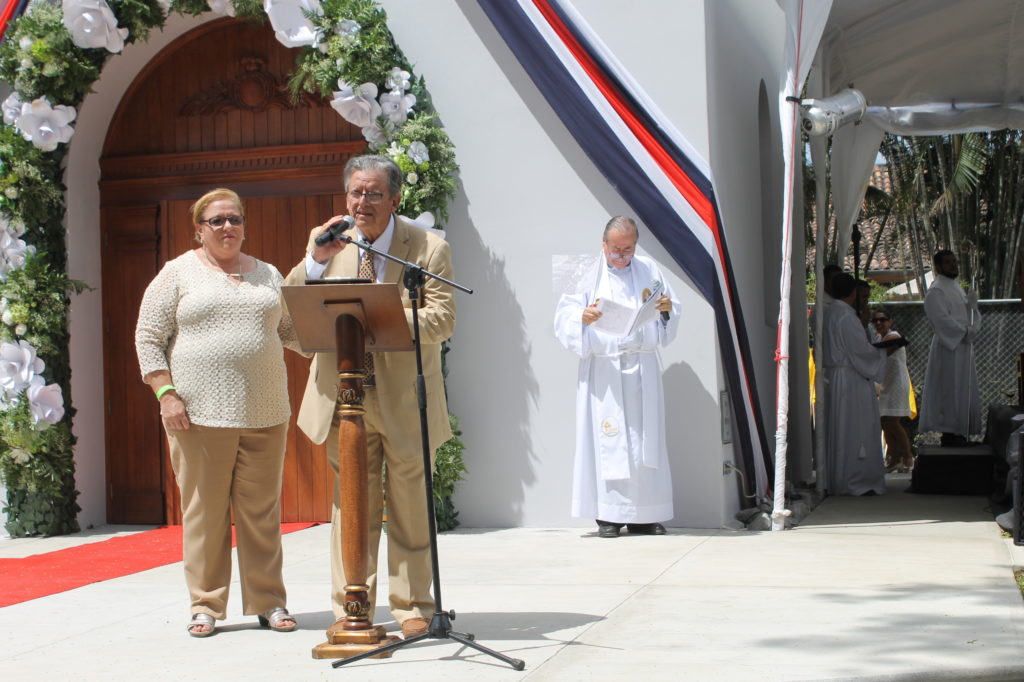 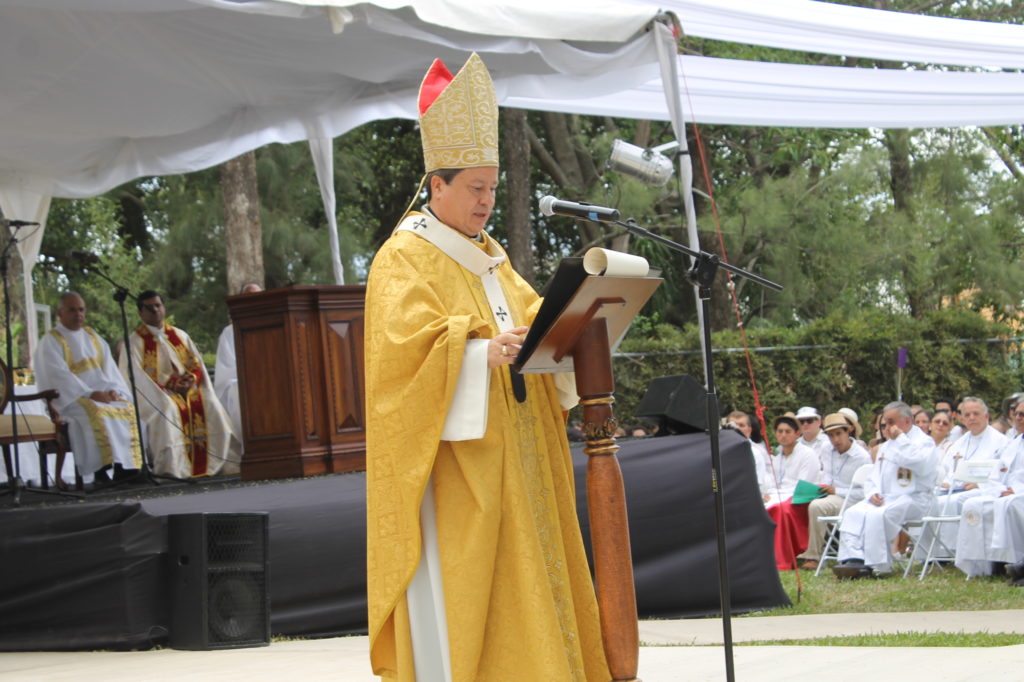 Now it is a Shrine, now it is open for everyone forever

They could not wait any longer.  After Communion, the Archbishop along with the priests took the Blessed Sacrament to the Shrine. The perpetual light was lit, God is present here, Jesus waits for his beloved Mother and his brothers/sisters in this Shrine.

And now it exists.

Joy should be expressed with applause, shouts, hugs…

Fr. Carlos Cox announced a great surprise – a dance of pure life, of pure joy on the steps of the Shrine.

Immediately afterwards, a line of pilgrims formed in front of the Shrine…

It was a grace to be in the Shrine for a long time, watching the pilgrims who entered, knelt in front of the altar, they had an intimate dialogue with Jesus and the Blessed Mother…then they asked for a photo. Alone, as couples, as an entire family, as a delegation from El Salvador, Panama… “But with the picture of the Blessed Mother visible,” a diocesan priest from Cuba insisted. It was his first time to participate in the blessing of a Shrine. He is a member of the first course of Federation Priests in Cuba. “Now I know what to desire and what to work for: the first Schoenstatt Shrine in Cuba.”

“Central America is no longer an orphan,” a young girl from El Salvador said, and she asked that testimonies be recorded in brief videos to share in her country. “We want to found a Schoenstatt Youth,” she said. “We want be founders like the Ticos [those from Costa Rica].

“Now we can really say: We go to the Shrine,” Derek Monturiol said on the afternoon of 18 March, as he went to the new Shrine once again for the celebration for the foreign guests. “We go to our Shrine.” 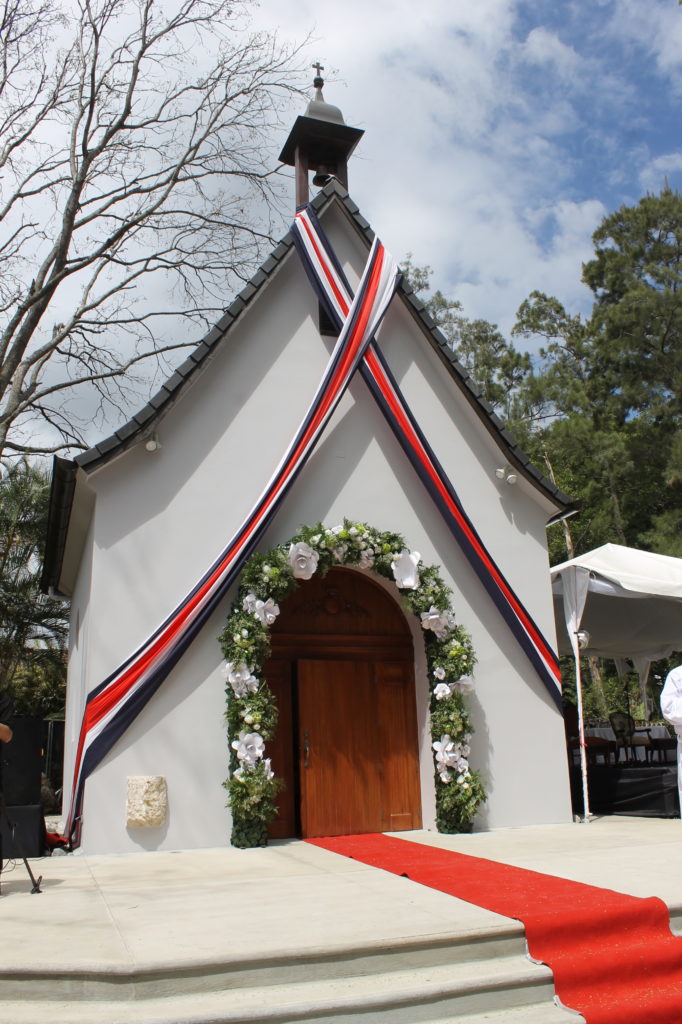 Photo album of the blessing 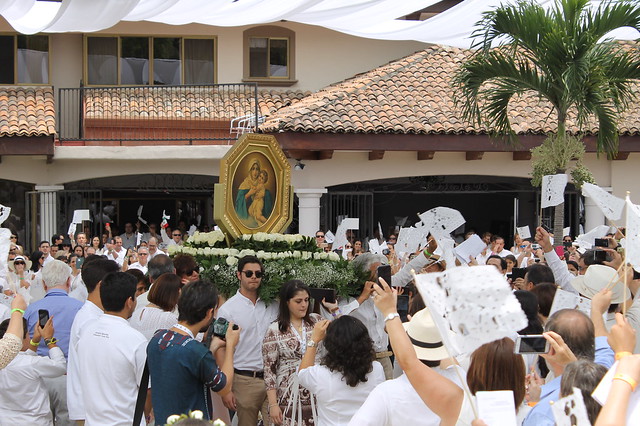 ‎Costa Rica has its Shrine!