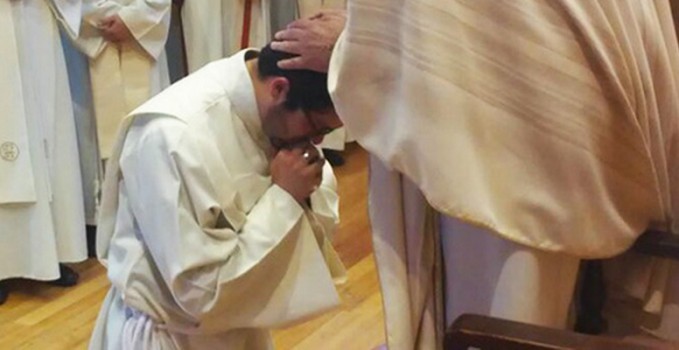 A joyful heart gives itself to Mary

On 31 October, the Secular Institute of Schoenstatt Fathers experienced a very moving and important moment: the diaconate ordination of a Brazilian. Ailton Alves Brito was ordained as a deacon at the Father Kentenich Major Seminary in Santiago, Chile with the motto: ““My soul magnifies the Lord, and my spirit rejoices in God my Savior, for he has regarded the low estate of his handmaiden.” (Luke 1:47-48). Mary’s joy in her conversation with Elizabeth shines in Ailton’s joy while he prepares to serve Jesus.

In the days before the ordination, Ailton was in retreat at the Schoenstatt Fathers’ retreat house next to the Major Seminary. There he was able to prepare with greater intensity for the big step he would take in his vocation. While he was humbly opening his heart during his retreat, his seminarian brothers were busy preparing all the details for the celebration: they organized the chapel’s pews so everyone could participate in the Mass, they placed flowers for the Blessed Mother, they rehearsed the songs so that everyone could sing together… These were not just Ailton’s requests but it was the atmosphere that permeated the ordination: it was a celebration for everyone! Ailton represented the joy that everyone felt with him.

But from where did so much joy come? From Mary’s heart! From every day that she spent beside Ailton and guided him in the priestly vocation.

In the year 2006, he entered the Schoenstatt Fathers’ novitiate, traveling to the interior of Paraguay, to a place called Tuparenda (“Land of God” in Guaraní), where he lived for two years. He also worked in a hospital in Argentina during a probation period. This time was significant for him and for his family. His brother, Genoilson Brito Alvs said: “At the beginning my parents felt a little insecure, where would he go? How will it be? Who will take care of him? But, as they have always done, they trusted and they allowed him to spread his wings”. The family has always been an important point for Ailton. His parents María and Manuel, and his brothers, Genoilson and Lucas Brito Alves, are part of this journey; although all the training took place in places far from the nation, far from São Bernardo do Campo, SP. Of course the Boys’ Youth from San Bernardo was also one of the pillars of this vocation – and Mary began to conquer Ailton’s heart through his contact with the Schoenstatt Boys’ Youth (Jumas).

The Mother of God was one of the other pillars that helped him during this time, the call to help the people as Jesus helped by giving himself for the community. These characteristics make Ailton a unique character among the Schoenstatt Fathers – not because the other priests are not unique, but because he is unlike any other priest. Every person, who at some time had the opportunity to speak with Ailton, did not leave without having a good laugh.

There were other important moments that marked his vocational road. In 2011, he carried out his pastoral practicum in Londrina, Paraguay, in collaboration with the Boys’ Youth of the Paraná Region, closely accompanying several members of the Youth. In 2014, he lived in Puente Alto, in a small house in a simple Santiago neighborhood along with three other course brothers of course, the four of them worked in the Lord of Mercy Chapel at the Joseph Kentenich Seminary, which is beside the chapel. During those periods, Ailton created bonds of friendship that are evidence of this joyful and dedicated spirit.

The invitation to the Mass was a detail about the ordination that attracted attention: The motto he chose was a phrase from the Magnificat, but the picture that was beneath it had no visible connection. That detail alone allows one to recognize Ailton’s ordered disorder that has many hidden meanings.

The design that was chosen was a painting by a German priest, known as “The Fishermen’s Supper”, which represents Jesus’ encounter with marginalized people who are portrayed in the Bible (such as the Pharisee, the stranger, the prostitute, etc.) in the eyes of Christ himself. And with joy this is how Ailton wants to live his future priesthood among the people who are in most need of the Father’s love.

Day of giving thanks

During the diaconate ceremony, there were many moments that made the participants empathize with the emotions that the young man felt such as: during the singing of the Litany, when they sought the intercession of the saints for the one being ordained, while he was prostrate on the floor, when he was vested with the stole and the dalmatic (the deacon’s vestments) for the first time with the help of his brother Lucas and his close companion and community brother, Deilton Coelho, and his friend, Fr. Pablo Mullin. In his homily, the Auxiliary Bishop of Santiago, Pedro Ossandón, gave Ailton some advice for this moment: go to bed early, be kind to people and always go to confession.

The presence of a new deacon, soon be ordained as a priest, is a great joy for all of Schoenstatt. Genoison expresses this feeling, which is also that of the family, “that having a brother, who is a priest, besides being special, is an unconscious guarantee of the unity within the family and for his person. We proudly welcome all the Schoenstatt Fathers, who have contributed so much to our lives,” not only for the parents, but also for the entire Schoenstatt Family who joins in the joy of this new fiat.

The Schoenstatt Family thanked the good God and Mary with profoundly for this vocation and the young man who will dedicate himself to the service of the Work, and also to all those who collaborated with Ailton’s vocational road, most of all his parents, Manuel and especially to Mrs. María do Socorro Alves de Brito, who returned to the Father that week, who with love for God sang the Magnificat with the Mother Thrice Admirable through the giving of her son as a deacon of the Church. We rejoice with you for this vocation, giving his heart to take God’s love to all people.