MEXICO, Ligie and Memo Barragán • The Family Altar Campaign has emerged as a joint project of Course No. 8 of the Institute of Families from Chile, Nova Nazareth Patris, and Course No. 1 from Mexico, Nazareth of Guadalupe. The project’s desire is to take the treasure we have received in Schoenstatt to the Church and families who have experienced the richness of having a Home Shrine. It is a project that has the Holy Family as a model and that seeks: To go out and serve the Church throughRead More 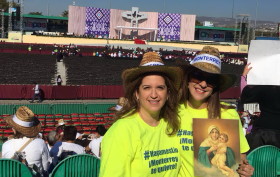 Francis in my Mexico: Testimonies of Mexican Schoenstatters (4)

FRANCIS IN MEXICO, Chiapas, by Mayra Delgado de Yamallel • What a blessed opportunity Mónica Guerra de Morales and I had to attend Encounter of the Families, with His Holiness, Francis, in Tuxtla Gutiérrez, Chiapas! Along with four other friends, who belong to the Apostolate of the Cross-, we arrived in this city for this encounter the previous night. We had tickets to Victor Reyna Stadium, which were provided by the Archdiocese of Monterrey. The first thing to decide was what would be the best time to go the followingRead More