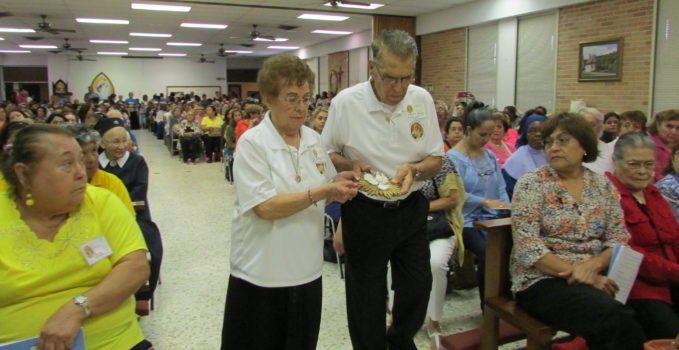 2017 May Pilgrimage from the Diocese of Brownsville, Texas

The Annual May Pilgrimage from the Diocese of Brownsville, Texas took place on May 28, 2017.  It was a beautiful day in which more than 500 pilgrims found their way to Confidentia Shrine in Rockport/Lamar, Texas.

We were blessed with the presence of Schoenstatt Father, Fr. Christian Christensen, Msgr. Gustavo Barrera, and Fr. Joe Villalón, both diocesan priests from the Diocese of Brownsville.  Both priests have sealed their Covenant of Love with Our Mother Thrice Admirable, Queen and Victress of Schoenstatt and each of them accompanied a busload of pilgrims from their respective parishes.  We are very grateful to both Msgr. Barrera and Fr. Joe Villalón for their assistance with the pilgrimage.  Msgr. Barrera gave a talk in English and Fr. Joe generously made time to hear confessions. 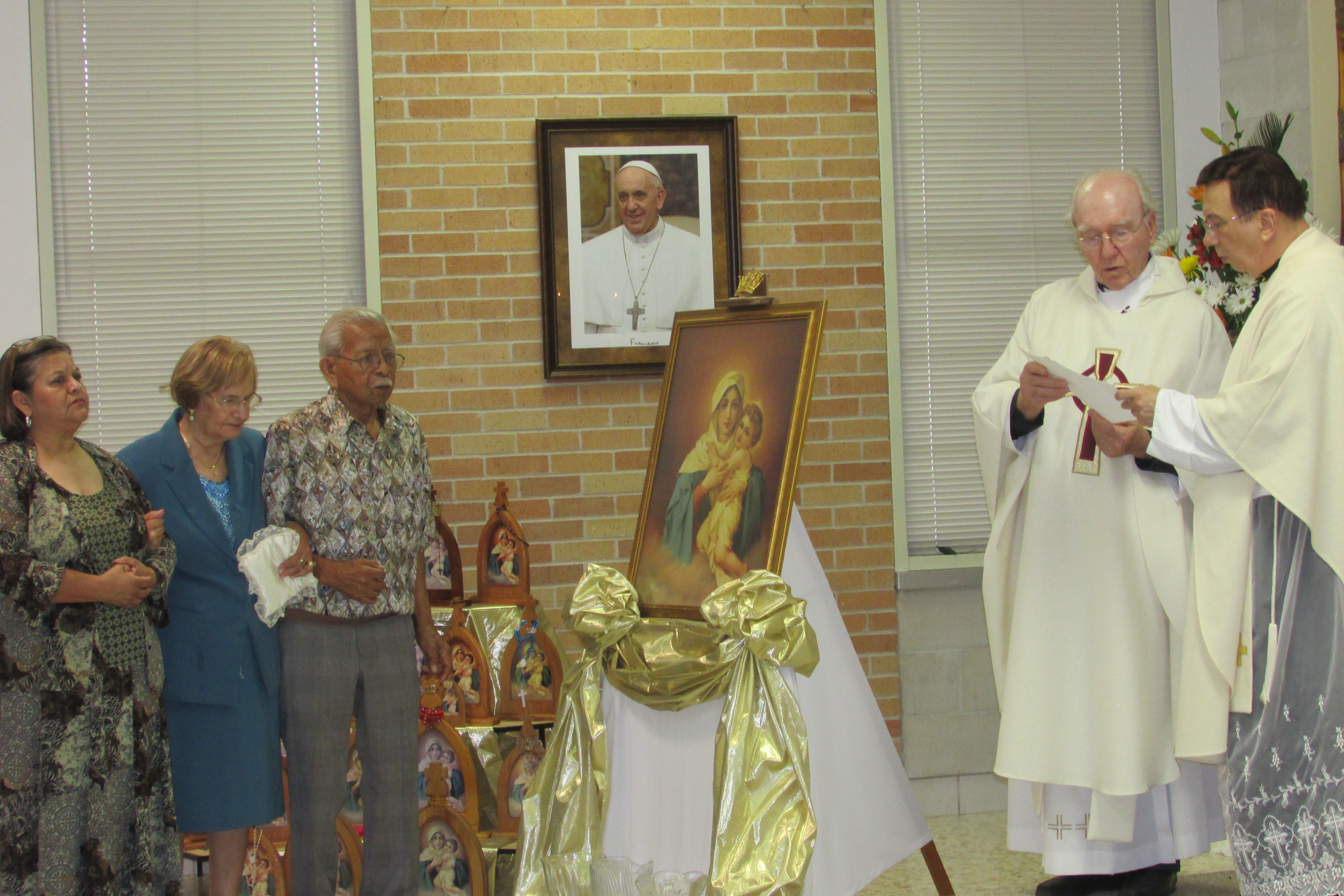 Beginning the day serenading the MTA

The day began with our usual serenade to the Blessed Mother in the Shrine.  Sr. M. Heidi and Sr. M. Maria generously provided the music along with the joyful accordion sounds of Mr. Gilberto Prado.  After singing the usual “Mañanitas,” a heartfelt welcome was extended to all the pilgrims in both English and Spanish.  After the jubilant music and greeting to the Blessed Mother, everyone proceeded to hear a talk in either English or Spanish.

After the talks, everyone prepared for Holy Mass.  Fr. Christian Christensen presided at the Holy Eucharist and both Msgr. Barrera and Fr. Villalón concelebrated.  In his homily, Fr. Christensen stressed the Ascension of the Lord and his promise to be with us always. Following are some of the thoughts that Fr. Christensen expressed in his homily: …to be with us until the end of time…to teach us everything and to never let go of us…that he would send us to make disciples, missionaries…He sends us to teach what he has taught us…He sends us to baptize…all life is immersed in Christ…everything has to be touched by the baptismal water, if not, it cannot be redeemed…Mother, help us to be missionaries of Jesus. 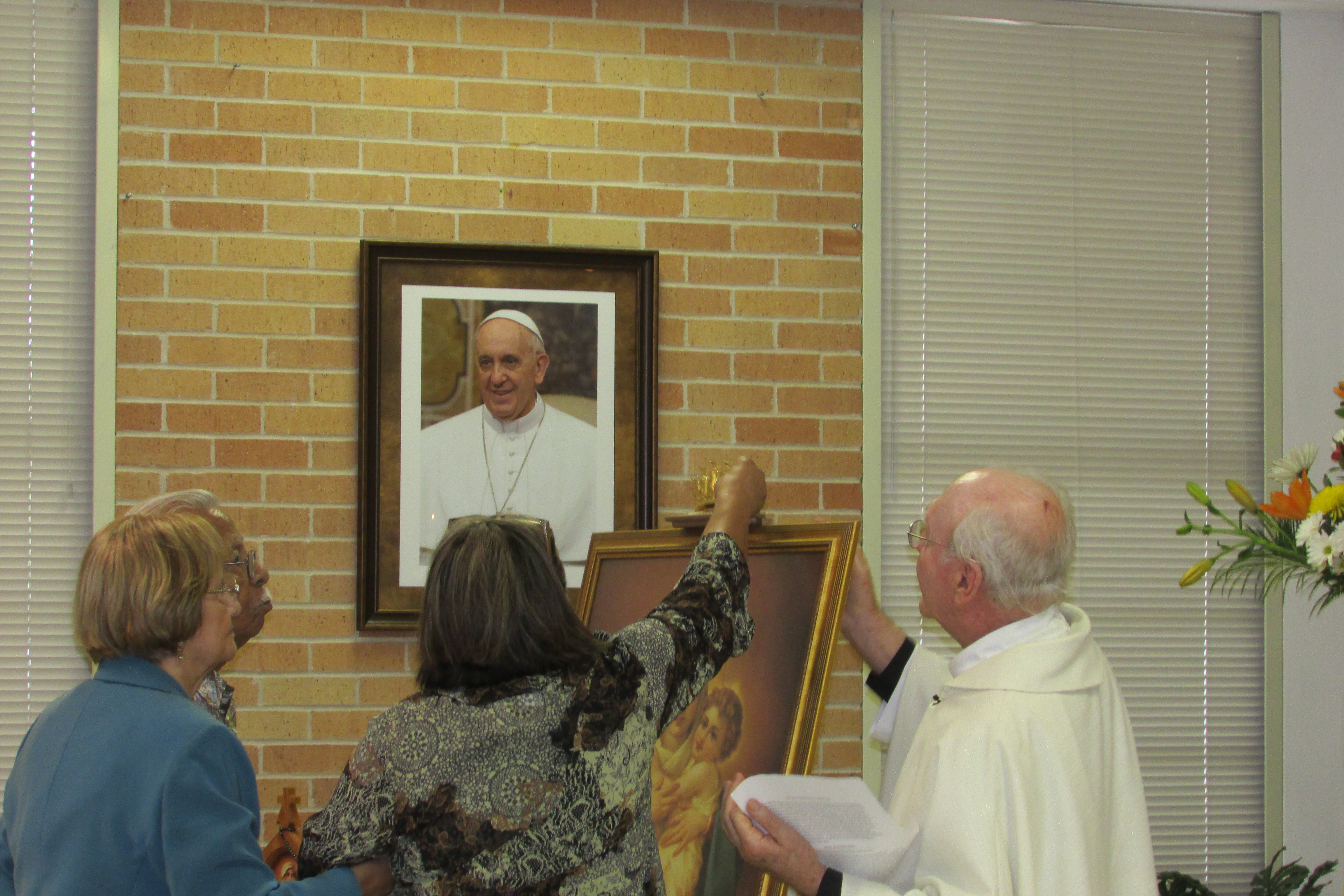 A special crowning for the Queen of Missionaries

At each pilgrimage, we crown Blessed Mother with a particular title relating to a present life current.  We do this immediately after the homily; it is becoming a tradition – during the last three years – that we crown Blessed Mother with a crown from a Home Shrine.  This year the honor fell to Esteban and Cristina Villarreal who belong to the first group for couples that was established in our diocese fifty-two years ago.  Everyone stood in solemn reverence as Lupita Rivera escorted her parents as they brought their crown to the Blessed Mother.  As Blessed Mother received her crown, the following prayer was recited in both English and Spanish:

Dear Mother Thrice Admirable, Queen and Victress of Schoenstatt, as your pilgrims from the Diocese of Brownsville, we bring you our grateful hearts.  We thank you for the many favors and blessings you have bestowed on us.  We also want to honor you and thank you for having appeared at Fatima 100 years ago.  At Fatima, you asked the shepherd children for prayer, sacrifices, and the Rosary, but you especially gave them a message of peace and hope for a world engulfed by war.  Dear Mother, we too want to be your missionaries.  We too want to be messengers of peace and hope in these troubled times.  “Let us reflect your image and walk through life entirely like you: strong and noble, simple and kind, spreading love and peace and joy.  In us go through our times and make them ready for Christ.”  Dying on the cross, Jesus appointed you, our Mother, because he knew that a Mother could often only remedy the troubles we face in life.  Because you are our Mother Thrice Admirable, Queen and Victress of Schoenstatt, we go forth from our Confidentia Shrine proclaiming you and crowning you:  QUEEN OF MISSIONARIES.

This solemn act was followed by the renewal of the Covenant of Love in both English and Spanish.  A thunderous and heartfelt applause produced many smiles and tears on the faces of the joyous pilgrims.

The beautiful Eucharistic Celebration continued and due to the large number of pilgrims, six stations were set up for the distribution of Holy Communion.  Following Holy Mass, ample time was allotted for lunch and, of course, shopping at the Schoenstatt store!

At 2:00 PM, forty to fifty coordinators/missionaries of the Schoenstatt Rosary Campaign gathered at the Shrine to renew their commission to work with the Pilgrim MTA for another year.

At 2:30 PM, everyone gathered anew in the auditorium for the recitation of the Holy Rosary.  Jesus and Mary Jane Tapia from Brownsville led the bilingual Rosary.  Fr. Joe Villalon then conducted the closing prayer and benediction.  He then extended a blessing for all the religious articles purchased.

Celebrating Fatima with a special gift

And last but not least, came our gift to the pilgrims.  It has forever been our custom to give the pilgrims a memento that will remind them of their pilgrimage to the Confidentia Shrine.  This year, taking into consideration the 100th anniversary of the apparitions of Our Lady in Fatima, we gave all pilgrims a beautiful white Rosary that had an attached medal of Our Lady of Fatima…and an MTA card with the covenant prayer in both English and Spanish on the reverse side.

As they received their gift, their beaming and joyous faces were an expression of their gratitude for all they had experienced on their Annual May Pilgrimage to Confidentia Shrine. 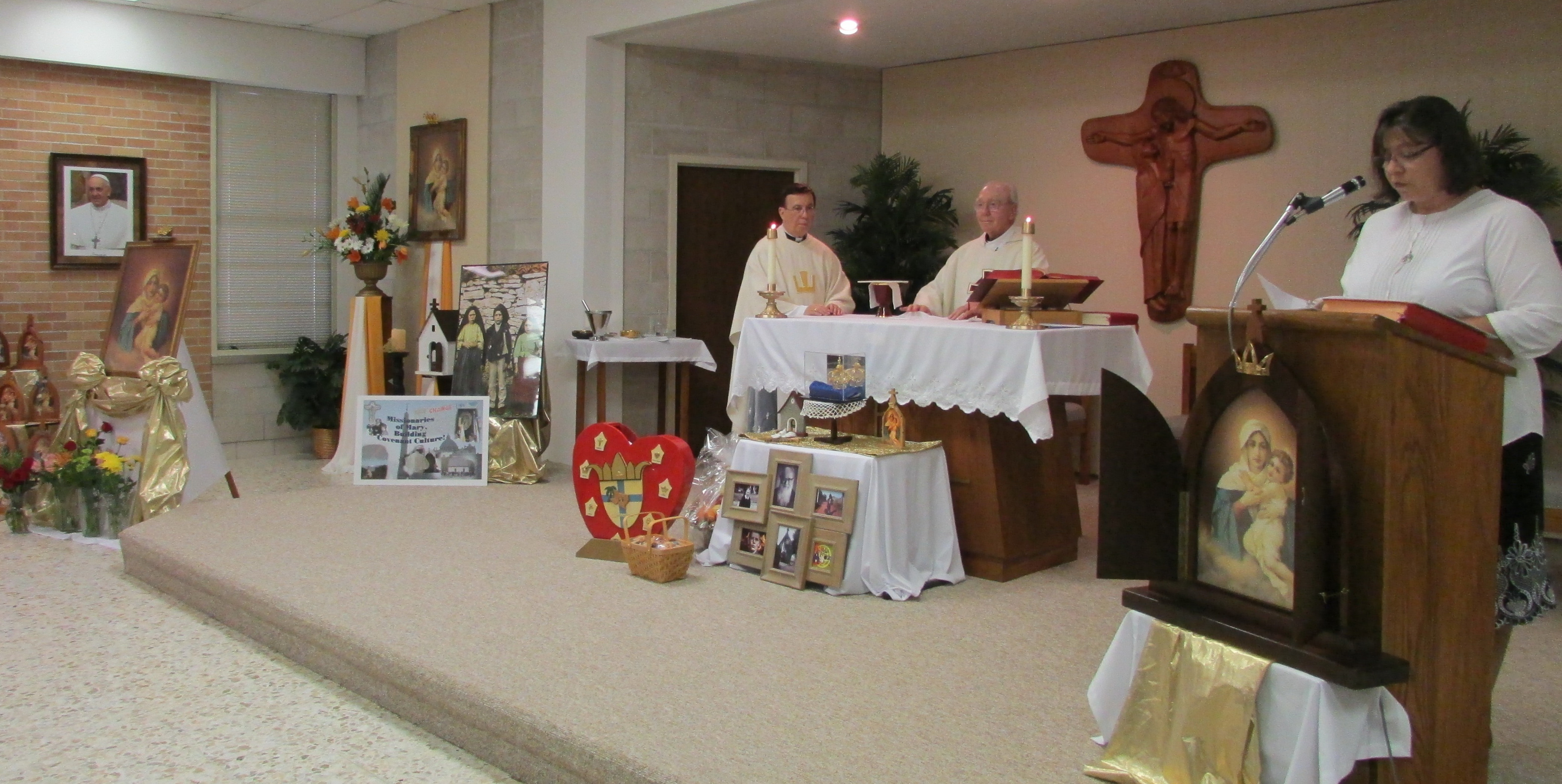