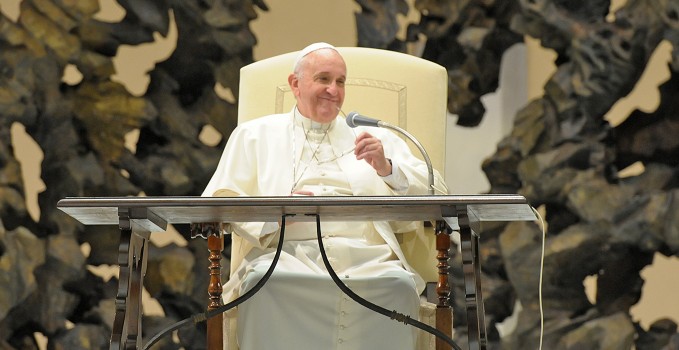 “The elderly are the reservoir of wisdom for our people!”

FRANCIS IN ROME, aica. During the general audience on 4 March, Pope Francis continued with the catechesis dedicated to families, following the spiritual exercises of the Curia and the Holy Father outside the Vatican for Lent.  The Pope dedicated his catechesis to the family and called for great care for elderly people in need, who live alone, are ill or depend on others.  He also asked newlyweds to renew their marriage vows every day.  “The 13th of March will mark two years since Pope Francis ascended the papal throne,” commented José M. Vidal, a Spanish journalist.  “Since then, without doubt, people fill St. Peter’s Square every Wednesday and Sunday. With the same fervour and the same illusion.  The people of God are his shield, in a referendum that takes place twice a week…people love him and tell him so.  And Francis interacts with each and every one of them.  He kisses children, receives flowers, greets, blesses, exchanges his skullcap, descends from the popemobile to speak with an elderly person…he loves and allows himself to be loved.”

Complete text of the Pope’s catechesis

Today’s catechesis and next Wednesday’s will be dedicated to the elderly, who in the family are the grandparents, aunts and uncles. Today we will reflect on the current problematic condition of the elderly, and next time, that is, next Wednesday, on a more positive note, on the vocation pertaining to this stage of life.

Thanks to the progress of medicine life-spans have increased: but society has not “increased” to life! The number of elderly has multiplied, but our societies are not sufficiently organized to make room for them, with proper respect and practical consideration for their frailty and their dignity. While we are young, we are led to ignore old age, as if it were a disease to keep at a distance; then when we become old, especially if we are poor, if we are sick and alone, we experience the shortcomings of a society programmed for efficiency, which consequently ignores its elderly. And the elderly are a wealth not to be ignored.

In the West, scientists describe the current century as the aging century: children are diminishing, the elderly are increasing. This imbalance challenges us, indeed, it is a great challenge for contemporary society. Yet a culture of profit insists on casting off the old like a “weight”. Not only do they not produce — this culture thinks — but they are a burden: in short, what is the outcome of thinking like this? They are thrown away. It’s brutal to see how the elderly are thrown away, it is a brutal thing, it is a sin! No one dares to say it openly, but it’s done! There is something vile in this adherence to the throw-away culture. But we are accustomed to throwing people away. We want to remove our growing fear of weakness and vulnerability; but in so doing we increase in the elderly the anxiety of being poorly supported and neglected.

During my ministry in Buenos Aires I was in direct contact with this reality and its problems: “The elderly are abandoned, and not only in material instability. They are abandoned out of a selfish incapacity to accept their limitations that reflect our own limitations, because of the numerous difficulties that must be overcome in order to survive in a society that does not allow them to participate, to have their say, or be reference in the consumer model of ‘only the young can be useful and enjoy’. The elderly throughout society should be a reservoir of wisdom for our people. The elderly are the reservoir of wisdom for our people! How easily the conscience falls dormant when there is no love!” (Solo l’amore ci può salvare, Vatican City, 2013, p. 83).

And it happens like that. I remember, when I was visiting a retirement home, I spoke with each person and I frequently heard this: “How are you? And your children? Well, well. How many do you have? Many. And do they come to visit you? Oh sure, yes, always, yes, they come. When was the last time they came?” I remember an elderly woman who said to me: “Mmm, for Christmas”. It was August! Eight months without being visited by her children, abandoned for eight months! This is called mortal sin, understand?

Once as a child, a grandmother told us the story of an old grandfather messed himself while eating because he couldn’t easily bring the spoonful of soup to his mouth. And his son, that is, the father of the family, had decided to move him from the dinner table and set up a little table in the kitchen to eat alone, so he couldn’t be seen. In this way he wouldn’t make a bad impression when friends came over to lunch or dinner. A few days later, he came home and found his youngest child playing with some wood and a hammer and nails, he was making something.  He said: “What are you making? — I’m making a table, papa. — A table, why? — To have one for when you grow old, so that you can eat there”. Children are more aware than we are!

In the tradition of the Church there is a wealth of wisdom that has always supported a culture of proximity to the elderly, a disposition of warm and supportive companionship in this final phase of life. This tradition is rooted in Sacred Scripture, as can be seen, for example, in these expressing from the Book of Sirach: “Do not disregard the discourse of the aged, for they themselves learned from their fathers; because from them you will gain understanding and learn how to give an answer in time of need” (Sir 8:9).

The Church cannot and does not want to conform to a mentality of intolerance, and much less of indifference and contempt towards the elderly. We must reawaken the collective sense of gratitude, appreciation, hospitality, so that the elderly can feel like a living part of his community.

We old people are all a little fragile. Some, however, are particularly weak, many are alone, and stricken by illness. Some depend on the indispensable care and attention of others. Are we going to step? Abandon them to their fate? A society without proximity, where gratuity and affection without compensation— even among strangers — is disappearing, is a perverse society. The Church, faithful to the Word of God, cannot tolerate such degeneration. A Christian community in which proximity and gratuity are no longer considered indispensable would lose its soul. Where there is no honour for the elderly, there is no future for the young.