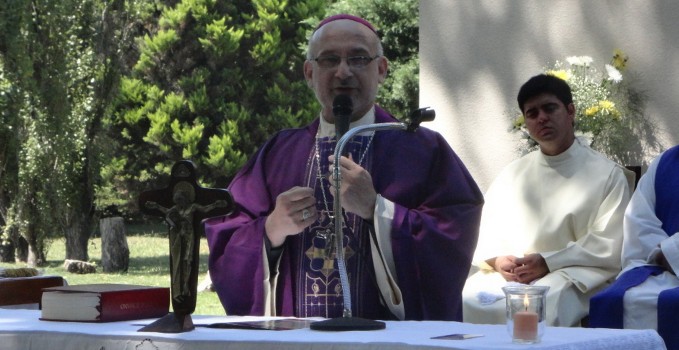 “This is not farewell; we continue working in the same Covenant”

Every year, on the last Sunday in February, the Schoenstatt Family of Región Gran, Buenos Aires, has an appointment; it is on the calendar for coming together and beginning the activities:  the Feast of Zion.  The Fathers of the Region (Argentina, Paraguay, Uruguay, Nigeria and Italy) conclude their annual meeting and have an Open House for the entire Family.  On this year’s occasion, there was also a farewell:  Bishop Francisco Piltilli celebrated his final Feast of Zion before assuming the position of Bishop of Encarnación, Paraguay.

Smiles, hugs, and moving re-encounters took place.  The presence of the “internationals,” Fr. Patricio Moore and Fr. Angel Strada, and Fr. Ludovico Tedeschi’s return from Italy were a pleasant surprise to all who arrived.  In the meantime, Fathers Manuel López Naón, Santiago Cacavelos and Beltrán Gómez tuned their instruments and adjusted the sound.  Other priests heard confessions and placed themselves throughout the park using two chairs, which became simple confessionals.  The trees have grown so much in Zion that it was not necessary to place any canopy above the altar for the Holy Mass celebrants, to protect them from the warm February sun.

Pope Francis ‘causes a row’ for us 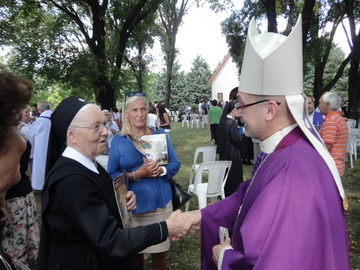 At the beginning of Mass, Bishop Pistilli expressed his gratitude for the presence and the warmth of the “Zion Family.”  He recalled the invitation to “cause a row” by Pope Francis and added “the Pope also ‘causes a row’ for us.  He has asked much from us as a community of Fathers, he has asked this step from me which I have been able to take joyfully and with the support of my community,” referring to his election as Bishop and he was thankful for the many prayers for his new mission and for the community of Fathers.

Then in the homily he referred to “God’s agenda and our agenda” and said,  “Often, God’s agenda is entangled because God’s collaborators are entangled.  Few place on their agenda ‘to do good’ and fulfill it.  Regardless, God continues forward.  Therefore, how important it is to say YES, placing it on the agenda and fulfilling it!”

Connecting the Biblical readings with the Pope’s Lenten message, Bishop Francis spoke about the temptations experienced in the Church, which Holy Father Francis defines as:

The challenge of putting together one’s own agenda

The new Bishop recalled that the Pope speaks to us of mercy, of joy, of going out and of mission.  He presented the challenge of putting together one’s own agenda and suggested “always place something great on our agenda, something positive, challenging, good.  We complain of many things, ‘that there is no justice, that there is no respect…’ instead of placing on the agenda my contribution for what is lacking.

If respect is lacking…I will do it.

If friendliness is lacking…I will do it.

If cordiality is lacking…I will do it.

If joy is lacking…I will do it.” 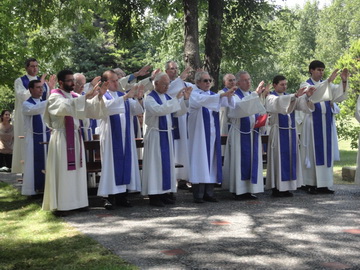 Before the blessing, Fr. Javier Arteaga (who remained as superior of the community) thanked Bishop Francisco for celebrating the Eucharist and promised prayers and contributions to the Treasury of Grace from everyone for his new ministry.  He also highlighted the task of so many collaborators who during the year help in so many areas in the Community of the Father’s Zion.

Lastly, Bishop Pistilli insisted in the need to pray for vocations and for priests to serve Schoenstatt and the Church.  Before praying the prayer for vocations together with those in attendance, he announced that the seminarian, Juan le Vraux, will be ordained deacon in Chile, and on November 7th, he will be ordained to the priesthood in Córdoba.

Greetings and a family lunch 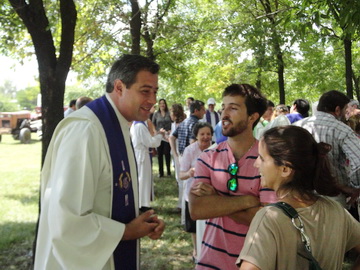 After Mass, everyone came forward to greet the priests and seminarians.  This is always a special moment since, for many people, it is the only time of the year in which they can talk to the Fathers who live in Córdoba, Tucumán, Paraguay, Europe or Africa.  Afterward they went to the Joseph Engling Hall where the community from Villa Ballester had organized lunch.  In a warm and family-like atmosphere, the conversations continued with sausages, hamburgers and ice cream.

The seminarians shared their rich experience of the Kentenich tertiary formation that had taken place during the last three months in Zion, and where they had classes with several Fathers who had known Father Kentenich.  They are packing their suitcases, because in a few days, they will return to Chile to continue their studies.

At mid-afternoon, Bishop Francisco Pistilli said humorously that on that day “he had all the lucky lottery numbers,” since he was also in charge of the Eucharistic Benediction in the Shrine.

Upon returning from Zion, some thoughts float through the mind and heart:  ‘to cause a row, to go out to the encounter in the Covenant with Mary, to live in the dynamism of God’s agenda.’  And a question emerges:  What do I place on my agenda for the next 100 years of the Covenant with the Blessed Mother?