CL: Rimini Meeting for Friendship among the peoples

The 30th Meeting of Rimini has took place following to the challenge given by Pope Benedict XVI: ” distance and absence of involvement are not ideals to chase, in vain, in the pursue of an ‘objective’ knowledge’. Instead, the ideal to chase is the adequate involvement with the object”.Everyone – speakers, guests an for first us – have been firstly conquered by the show of almost 4.000 volunteers that have paid their board and lodging in order to work at the Meeting, sign of a will to make an experience, that is to live what makes you grow, and to share it with everyone. It is an authentic “miracle” that recurs since thirty years and that – as many say – is impossible to find elsewhere, fruit of an education to live gratuity as a dimension of every relationship. 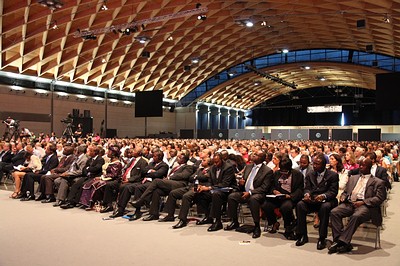 With almost 800.000 participants -the number of visitors from abroad is rising – the meeting spaces have been literally saturated from many that had the possibility to meet international personalities and protagonists of Italian life, to visit exhibitions and to attend to the programmed shows. The Miguel Mañara by O. Milosz, one of the most loved text by Meeting people, and concert of Enzo Jannacci, musical and human genius have been very significant.

The almost 300 speakers that have intervened during the week have contributed to the realization of a new knowledge of reality and in some moments they have communicated the fundamental meaning of things. Starting from Fr. Julian Carron: in a Meeting that has focused on knowledge it would be difficult to find a better witness than Saint Paul to document the truth of the title chosen. On the other side, Carmine Di Martino has shown the importance of the topic inside the journey of the modernity.

During seven days people have seen that the journey of knowledge is not reawakened from speeches or abstract explanations, but from the encounter with people that know the reality in a new and attractive way, a way that is full of promises of truth and good.

The week of Rimini has presented a series of witnesses, new and known. Amparito from Ecuador, friend from the Rione Sanità in Naples and Josè Berdini from Corridonia, Fr. Aldo Trento from Paraguay, Marco and Cleuza Zerbini from Saint Paul in Brazil, Rose and Vicky from Kampala and the prisoners from Padova.We have also listened personalities from the cultural world as Mary Ann Glendon, that has introduced the topic of “elementary experience” as the root of human rights.Philosophers as Remi Brague and Fabrice Hdjadj, and Nobel prizes and scientists as John Mather, Charles Townes and Yves Coppens have shown what is the meaning of “to widen reason”.

The 30th Meeting has opened with an exceptional international event, favored by the minister Frattini: the encounter with four leaders of four African Countries, that have discussed about peace and development. The human and politic testimony of Tony Blair has been absolutely unexpected, and it has also been a public confession of the reasons of his conversion to Catholicism: the discovery of the universal nature of the Church.

Furthermore, masters of institutions, of the Italian government and of the opposition have accepted to compare about real topics of the life of a people, from education to work, from economy to justice. That has been the case of Renato Schifani, Mario Draghi, Giulio Tremonti, Angelino Alfano, Maurizio Sacconi, Claudio Scajola, Mara Carfagna, Mariastella Gelmini, Roberto Calderoli, Luca Zaia, Pierluigi Bersani and Enrico Letta. At the same time intervened managers from business and financial world as Corrado Passera, James Murdoch, Fabio Conti and Raffaele Bonanni.The Meeting, following to its tradition, has proposed moments of real ecumenism with representatives of Jewish, Orthodox, and Muslim tradition, moved by a sincere will of dialogue in order to create a pacific cohabitation in truth and difference. The speech of the Cardinal of Madrid about the Church contribution to social life and the one given by the Cardinal Caffarra about the reasonableness of faith have been particularly appreciated.

In the last book by Fr. Giussani, Qui e ora, presented in the conclusion of the Meeting, it is written that “the man, the one who acts with a minimum of reasonableness, acts with a final end”.For this reason, the title of the 2010 Meeting, that will take place in Rimini from 22 to 28 August is:” That nature wich pushes us to desire great things is the heart”.