Toward 2014 in Covenant with Parish Projects 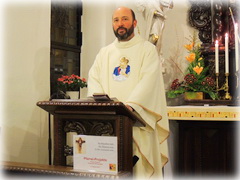 mev. On Saturday, February 2nd – The Feast of the Presentation of the Lord – the Holy Mass toward 2014 was celebrated in covenant with all apostolic projects at the service of parish communities. In the first place, the Schoenstatt Rosary Campaign should be mentioned in this missionary context, as: agile, simple, popular, efficient and committed to entering the parish; it serves to infuse a new life of faith to the parish communities. The Daybreakers or the Men’s Rosary plays a similar role wherever they exist. 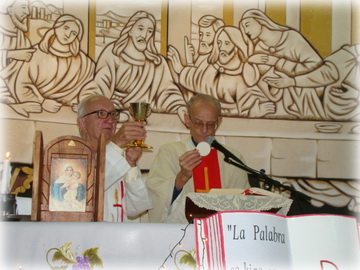 This covenant Mass with all the projects at the service of the parishes was moreover a good opportunity to recall the many diocesan priests and Schoenstatt Fathers, who develop a ministry in their parishes to take care of the people of today. It is also important to recall the youths, university and family missions that take place in parishes that give witness to the Faith and those of many other initiatives, and of many Schoenstatters, who carry out activities and services in their parishes that favor parish life.

The shrine was filled on Saturday morning. Many youths from several South American countries, who are visiting Schoenstatt for several days, arrived at Mass despite the cold morning. Father Ignacio celebrated the Eucharist, which was transmitted live by Schoenstatt-TV since it was the first Saturday of the month. He spoke to the faithful, who were present and to the virtual ones in German and Spanish.

In the Shadow of the Shrine 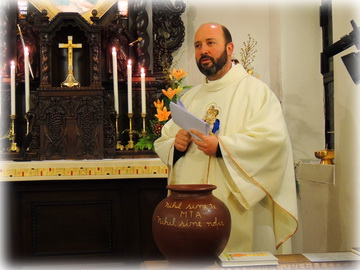 At the beginning, Father Ignacio listed several important events that are commemorated every February 2nd. Among them, he referred to a prophetic phrase that Father Kentenich said in 1929, “we believe that this Shrine s not only for us who live in this place; but rather for the Schoenstatt Family of the entire world, and not only for the Schoenstatt Family; but rather, also for the Church and for the entire world.”

The “Candlemas Vision” of Father Kentenich in 1942, the Home Song prayer (p.158, Heavenwards) of 1943, the Founding of the Institute of Our Lady of Schoenstatt in 1946, and Father Kentenich’s visit to Rome in 1966 are other commemorations that are celebrated on this day and that were mentioned in the Holy Mass.

Schoenstatt: Light of the Nations

Father Ignacio continued, “In the light of the today’s Gospel, we can reflect on our own mission as International Schoenstatt: In this Year of Mission we want to be a light to the nations.”

Also in the spirit of the Feast of the Presentation, the intentions for this Holy Mass were offered, with special prayers for the victims of the fire in Santa María, for their families and friends, and for everyone who has collaborated in the rescue and medical attention of the wounded.

Just like Joseph and Mary who arrived at the temple with a pair of doves, the offerings that arrive, week by week, from several countries are a contribution to the Capital of Grace: “small things, or perhaps not such large things, perhaps large efforts, but we always bring our pair of doves to the capital of grace,” Father Ignacio concluded. 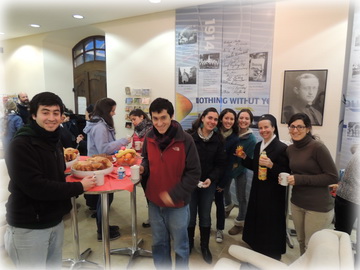 A special greeting was sent to those who followed the transmission via Schoenstatt-TV and there was also an expression of gratitude to those who make it possible through their effort and work. All the participants renewed their Covenant of Love, each one in their own language with the intention “that our Covenant be a light for our Schoenstatt Family, for the Church and the entire world.”

As on every first Saturday of the month, those who attended were invited to and enjoyed a delicious breakfast at the Old House, where they not only shared bread; but also formed attachments.