Toward 2014 – in Covenant with the University Missions, Brazil 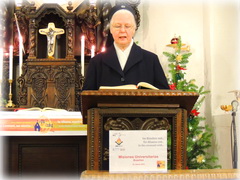 mev. On Saturday, January 19th, the Holy Mass toward 2014 was celebrated in covenant with the University Missions in Brazil; these missions are one of the most dynamic and missionary projects that has emerged from the Covenant of Love. Youths and entire families go out to meet the people with the picture of the Pilgrim MTA and the Missionary Cross to give witness of faith and joy and selflessly to offer help in the service of those who most need it.

“Go and make disciples of all the nations” 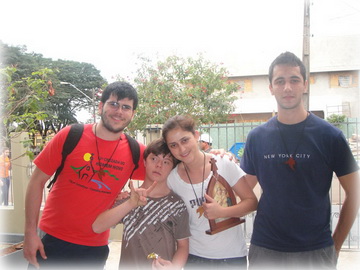 There are university missions within the Schoenstatt Youth. Many Schoenstatt youths are the support and soul of the missions in their universities, and they are the ones who motivate others to participate. This occurred in a natural and evident way in the sign of the Cross and the Pilgrim MTA. To become allies with the University Missions in Brazil this year means becoming allies with the World Youth Day in Rio, whose motto calls to mission – “Go and make disciples of all nations” – and for the first time in the history, World Youth Day will be preceded by a missionary week carried by youth throughout the world.

“Today’s intention is connected to the Gospel of the day in which we hear how Jesus called one of his apostles. Jesus is the first missionary,” Father Raúl Espina said at the beginning of the Mass. 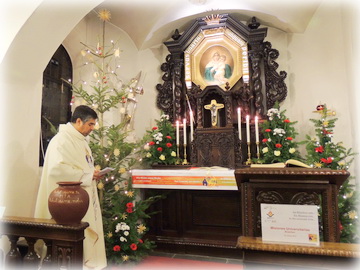 There were many other intentions – especially the permanent intention of these Masses, that of the spiritual preparation for Jubilee 2014 – as well for the present ones, the victims of the hostages taken in Algeria and of the violence in Syria, Mali and so many other countries, and for the Family and Youth Missions of these weeks, all of them rested silently on the altar during the Mass. Approximately forty pages with petitions, offerings and expressions of gratitude that arrived this week from Argentina, Brazil, Chile, Mexico, the United States, Spain, Peru, Costa Rica, Germany, Qatar, Uruguay, Canada, Holland and Portugal were presented as contributions to the Capital of Grace for 2014 and beyond.

Next Saturday, January 26th it will be the turn of a project from the field of “Social Order” – Mary’s Home, Argentina.

List of projects date of the Masses – January to April 2013