Posted On 23. January 2013 In Covenant solidarity

The Family Missions have started 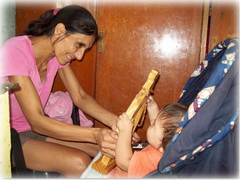 ARGENTINA, Lilita and Carlos Ricciardi. The Family Missions of the Schoenstatt Apostolic Movement began January 21, 2013. The missions will be held in the area of Mundo Nuevo, Departamento of Rivadavia from January 21st to January 26th in Piedras Blancas, Province of Entre Rios from January January 29th to February 3rd, and in Coronel Pringles, Province of Buenos Aires from January 26th to February 2nd. A group of couples with their children and other youths go on mission as a family and for families: they give up part of their vacation for this noble apostolic task. Their mission is to take the word of Christ and the educational effectiveness of the Virgin to every one of the families of these locations. This task has been carried out in Argentina since 1999.

Those in charge of the Family Missions in Entre Rios share: “This year the motto is COVENANT FAMILY, MISSIONARY of FAITH…!!! We are ten couples, two priests (Father Federico Piedrabuena and Father Ricardo Abalde) and the diocesan seminarian: there was a total of 113 missionaries. This year we will have the presence of the missionary youths from San Juan, Dean Funes, (Cba), Córdoba, a family and Girls Youth from Resistencia. All of them want to “found” the Family Missions in their communities.

Since the year 2000, many people who do not go the Missions accompany them with prayer, the Rosary and daily Mass, thereby joining a prayer chain for the success and fruitfulness of the Family Missions. For several years, these “missions of solidarity” are open to everyone who wants to be part of this missionary initiative through schoenstatt.org, something that is especially important now, in the year of the missionary current in preparation for 2014. 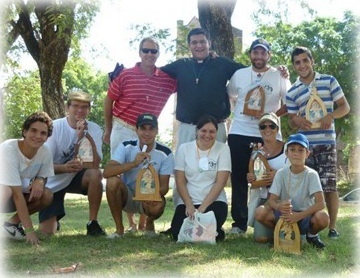 We ask that you pray for the Family Missions at some time during the day, for example the Holy Rosary, participate in the Holy Mass or to make some contribution to the capital of grace for the missionaries. At the end of the day of mission, during the night prayer, everyone who has prayed for the mission is mentioned, within a profound framework of gratitude and spiritual unity.

We ask whoever wants to unite spiritually to the Family Missions to contact us at: estudioricciardi@ciudad.com.ar. At the same time, we ask you to distribute this invitation to the communities and to pray for the daily intentions of the Masses during the week of Missions praying:

For the families of the Schoenstatt Movement that mission in Mundo Nuevo (Province of Mendoza);
Piedras Blancas (Province of Entre Ríos);
Coronel Pringles (Province of Buenos Aires);
from January 21st to February 3, 2013.

Time of missions. Time of solidarity. Time of grace.