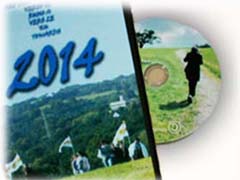 Jorgelina Jordá. On October 11, a long-awaited package containing thirty brand new DVDs arrived, and on that very same day, it was finally possible to upload the video – in different formats – to the Internet. When the DVDs were sent via mail to those in charge of the preparation of 2014 in each country, a busy “era” ended in Schoenstatt: that of preparing – in the name of Team 2014 and with an international crowd of volunteers in different countries – a motivational video for the opening of the triennium this October 18th in the Shrines, wayside shrines, and home shrines all over the world. The video may also be helpful in later meetings that are meant to start the preparation for the centenary of the Covenant of Love. The nine minute video is without any dialogue and therefore does not need translation.

Purpose of the Video: 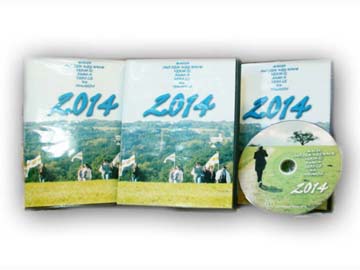 The video’s purpose is to summarize and show the main currents of life that have emerged over the past 100 years of Schoenstatt history. In the first part, pictures show how the entire International Family is enjoying the visit of the Father Symbol. Secondly, one sees many feet representing the pilgrims, some are close, others are further, but all of them are on the way towards the Original Shrine, towards the preparation for 2014. There the Family introduces us to the three currents that will lead us to this celebration: the Father current in 2011, the current of the Shrine in 2012, and the missionary current in 2013, represented by the International Auxiliary of the Schoenstatt Rosary Campaign.

Next, the third part shows Schoenstatt life throughout the world, identifying Schoenstatters in the life of each Shrine, and the way in which they give their Marian charism to the Church. This final part is also related to the invitation to go on the Rome pilgrimage in 2014.

In summation, this is a video that leads everyone to reflect, that makes everyone happy, and leads everyone to value the Schoenstatt treasure. But above all, it is motivating all to deepen themselves in the celebrations of 2014, in unity as a family now, so that everyone can be included at the beginning of the triennium.

Manu López Naón along with Santiago Cacavelos offered songs from the CD, “Stay Among Us” for the publication of the motivational video; two of the eleven songs were selected to create this artistic work.

Summary of the songs:

1st Song: “We are Church”
This song expresses the reality of the present day world, a world without meaning, fearful, narcissistic. And yet in spite of this, Schoenstatt continues its mission: “Night cannot extinguish that light.” The song also refers to being disciples who mark an era in the Church. In spite of weaknesses as a family and the moments in which people still need to grow, it is to the Church that Schoenstatt will give the great richness that our founder gave us – now. “The Church waits for what Father Kentenich came to give”.

2nd Song: “Missionaries”
This song expresses the joyful feeling of being Schoenstatters and belonging to an international family. It is also about being sent forth. The phrase, “When joy comes from above there are no borders, we only have to share,” is constantly repeated.

It is a song describing the personal experience of a Schoenstatt missionary and his loyalty to the Covenant of Love. At the times when he/she feels weak for love of the Blessed Mother, they leave their fears behind. It reflects on the moment in which a missionary gives himself/herself with all their being to the work, and they ask the Blessed Mother to teach them to walk, to pray, and in this way, She will be established everywhere. The missionary discovers the fire of the soul in the Blessed Mother, which leads him/her to shout: “I AM A MISSIONARY!”

This particular song motivates one to find the strength in our first source of love: The Blessed Mother and her Covenant. Thanks to her, everyone can go out into the world announcing her Son with the joy that identifies him/her as being a part of the large worldwide family.

How can it be obtained?

Last week the DVD was sent to the Directors of the Movement or those in charge of 2014. This DVD can and should be copied and distributed wherever possible (no copyright restriction).

The video can also be downloaded from Internet – in different formats – from October 17th. Those in charge of the opening celebrations of the Triennium and of the October 18th celebrations, as well as those in charge of Internet websites can request the link. It will also be uploaded to Facebook and YouTube.