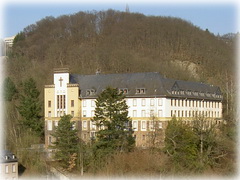 mkf. October 12, 2010: The Feast of the Blessed Mother of Pilar in the Americas is the commemoration of the sailor’s, Rodrigo de Trian, landing in 1492 after navigating for more than two months at the command of Christopher Columbus to the place which would later be called America. It is also the anniversary of the death of Father Esteban Uriburu – called Schoenstatt’s Christopher Columbus by Father Kentenich. It is a sunny autumn day in Schoenstatt, marked by the preparation for the German October workshop, and the international opening of the triennium for 2014. It is a day with an important step for Schoenstatt, although it was almost made in a hidden way; the new civil Association for the Covenant House, “Bundesheim”, was born.

On this October 12th at 11:00 a.m. the document was signed at the notary. On October 17th, minutes before the beginning of the celebration for the opening of the triennium (7:30 p.m.) Fernando Arrau, from Chile, owner of the house, will sign the deed at Father’s tomb, and then he will take it on pilgrimage to the Original Shrine, where he will present it in this historic moment of the family. On November 23rd the meeting of the new board of directors of the new Association will take place. 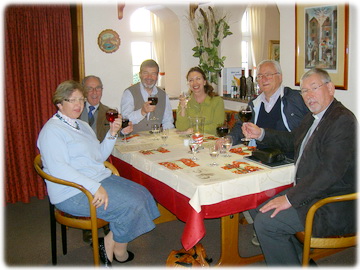 Dr. Luis Jensen, Chile, a member of the new board of directors, hopes that now “together we will give life to the house that was cradle of our family.” He hopes that by the end of this year the necessary remodeling of this first part of the house will begin. Visibly happy, Father Egon Zillekens, a member of the board of directors, promised: “On the night of October 17th for the pilgrimage to the Original Shrine for the opening of the triennium, we will decorate the entire house with candles and little lanterns!”