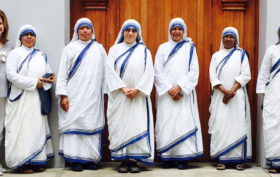 COSTA RICA, Eugenia Cruz de Garnier • On Thursday, August 24, we had the joy of welcoming Mother Teresa of Calcutta’s Sisters of Charity for a visit at the Family of Hope Shrine in San José, Costa Rica. They brought blessed Rosaries and postcards with a picture of St. Mother Teresa of Calcutta, which they affectionately distributed as a sign of gratitude for the invitation. They feel very united to Schoenstatt through the Unity Cross that St. Mother Teresa adopted for her congregation of Missionaries of Charity priests and forRead More 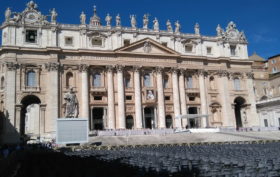 ROME/THE VATICAN, by Fr. Rolando Gilbert Montes de Oca Valero, member of the Federation of Schoenstatt Diocesan Priests in Cuba, studying in Rome • The morning of 4 September 2016, in Rome, dawned differently.  There was a great movement of pilgrims towards St. Peter’s; they had come from all over the world.  Joyfully, I was able to recognize the Archbishop of Bujumbura, Burundi and many other Africans.  Flags from Australia and many European countries were waving.  I met Latin Americans from many nationalities that I was able to share with,Read More