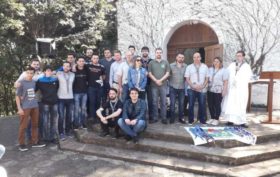 BRAZIL, Leonardo Rodrigues • On Sunday 16 June 2019, the Schoenstatt Boys Youth (JUMAS) in Guarapuava celebrated their twentieth anniversary, a reunion that touched the hearts of all who attended the celebrations. An encounter of the founding and new generations. It was an indescribable moment for the younger members to see the tears of nostalgia and the smiles on the faces of those who once had the experience of being JUMAS.— A short history Some say 20 years is such a short time, others say it’s an eternity. For us,Read More 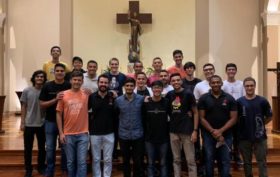 BRAZIL, via jumasbrasil.com.br • The Schoenstatt Boys Youth (Jumas) in Cornélio Procópio have joined the city community for Sunday Masses as part of a new initiative: “Jumas Goes Out.” With this initiative, Jumas aims to meet together once a month for a branch mass at one of the churches in the city. On 17 March, the branch met at Christ the King Cathedral and celebrated Holy Mass with the community, so that Jumas can be closer in prayer to the community of Cornélio Procópio. Each month, a different church isRead More