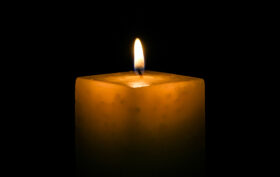 GERMANY, Maria Fischer • “In these winter weeks, hundreds of people die every day as a result of the Corona virus, every day thousands of people are newly infected. Even if spring promises hope: this winter is still long,” reads the message on the official website of German President Frank-Walter Steinmeier. The Federal President is calling for the #lightwindow campaign and will place a light in a window of Bellevue Palace in the evening from January 22, 2021, so that it is clearly visible. In doing so, he is rememberingRead More

AUSTRIA, P. Elmar Busse • “I can’t get no disinfection!” The malapropism of the Rolling Stones’ song written by Mick Jagger and Keith Richards (the single with “I can’t get no satisfaction” became the Rolling Stones’ first number 1 chart success in the United States in 1965) did not apply in Rojach-Hof in Carinthia, where a family congress took place from July 25 to August 1 despite Corona. — Dispenser bottles with the corresponding information boards were placed in front of the toilets anyway, but also in front of theRead More