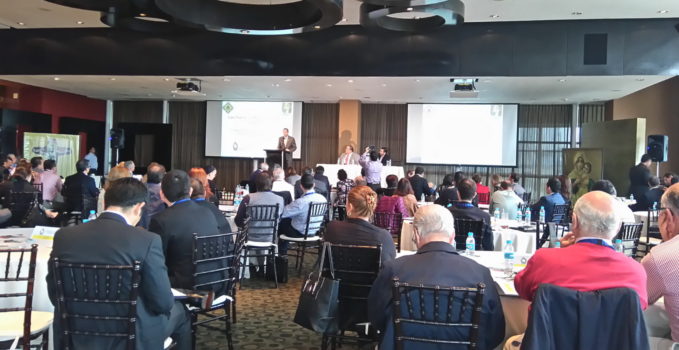 The company, a path to holiness

PERU, Maria Fischer, with material presented on the cieesinternacional.org website•

The fifth International Congress of Schoenstatt Businessmen and Executives will be held from the 2-4 November in Lima Peru, with the motto: “The company, a path to holiness.”

“This Congress is preceded by the following Congresses: Guayaquil, Ecuador (2011); San Jose, Costa Rica (2013); and Monterrey, Mexico (2015). At these Congresses, the participants defined the Schoenstatt business leader mindset and the CIEES’ mission and vision,” explained Jorge Arteata, a committee organizer. The Spanish acronym CIEES (which is also used by others for the “Center of Investigations and Specialized Studies in Quito, Ecuador, the Center in Integrated Electric Energy Systems of the Centers for Advanced Technology – CAT – New York network, was the first acronym, although it has been changed several times, from “Schoenstatt Ibero-American Congress of Businessmen and Executives” to the current “Schoenstatt International Community of Businessmen and Executives.”

The CIEES was born to take the Covenant Culture into the business sphere and to clarify the Kentenich mark, which should characterize a business leader and his company. In response to this desire, at the Guayaquil Congress, Schoenstatt businessmen and executives decided, as laymen, to undertake forming CIEES, with the commitment of organizing communities in every country and having a bi-annual congress to present the advances. CIEES is currently present in Argentina, Brazil, Chile, Costa Rica, Ecuador, the United States, Mexico, Peru and Paraguay.

The apostolic spirit of the business leaders is strengthened during these kinds of gatherings, and it gives them the opportunity to dialogue with those in the business world and to clarify their lay commitment, as well as to present the richness of our charism.

A businessman on the path to holiness

At this congress, Carlos Barrio, Argentina, will introduce someone, who has already appeared several times on schoenstatt.org:  Enrique Shaw, an Argentinean businessman in the process of canonization. Other subjects presented will revolve around the personal training of the executive or businessman: “Attachments: a new way to exercise authority” (Carolin Dell’Oro, Chile), “The importance of cultivating spirituality for the leader” (Luis Carlos Mozzato / Brazil), and Faith in Divine Providence in business relationships (Miquel Lelo de Larrea/ Mexico).  Moreover there will be testimonies and several opportunities for dialogue among the participants.

An international website (in Spanish) is also available on the internet that provides information about the CIEES activities: http://cieesinternacional.org/ with a detailed program about the Congress in Lima, as well as many videos, photos, documents by different speakers for the workshops and International CIEES gatherings and news about events organized in different places.