Posted On 5. February 2013 In Schoenstatt - Reaching out

ARGENTINA, Guillermo Elcano. Saint Martin’s Square was the stage for a night filled with color, music, and joy, and experienced as a family. After several activities for children, youths and adults that were developed during the week, music had to be at the center of unity in the community. The missionary youths gave a clear message to Pringles’ youths about responsibility in studies and about recuperating values through Shakespeare’s play of Romeo and Juliet that caught the attention of the participants (which by the way was an entertaining adaptation); the event was held in Saint Martin’s Square on January 31st.

The show continued with animations and songs that were also undertaken by other mission youths that prepared the atmosphere for the presentation of the Indio Rico’s local artists who gladly accepted collaborating with folk night. The performance of Carlos “the Negro Barrosa” and of Cabra Santana, well known professional musicians, who presented their talent that great night that also included Juan Cruz Urban’s performance. Juan Cruz Urban is a blind journalist, a radio announcer and musician from the neighboring area of Indio Rico, who came to share his music, his love and respect of life at this large folk night convoked by the Family Missions. Moreover, a local neighbor, Mr. Roberto was also on the stage of Saint Martin’s Square, who accompanied a Father of the mission with his guitar, Alejandro Minvielle sang Virgen Morenita among other songs.

This folk night with the people, with the community of Coronel Pringles, was the preamble of the large closing Mass that was held the following day, Friday, February 1st, with the local pastor, Ernesto Mendiondo, and Father Arteaga, National Director of the Schoenstatt Movement and who was present during the entire mission con-celebrating; the celebration was held in Saint Peter’s Chapel with massive participation by the community.

Covenant that is alive

After Mass, there was a procession with torches through the streets near the chapel praying the Holy Rosary, it was also a time to meditate on the life of priests and lay people of the Schoenstatt Movement as examples of holiness, a call that God makes to everyone, men, women, priests, religious, lay people, children, youth and adults.

The Family Missions are now in Pringles for the large mission

In the Independent Club activities for children are carried out 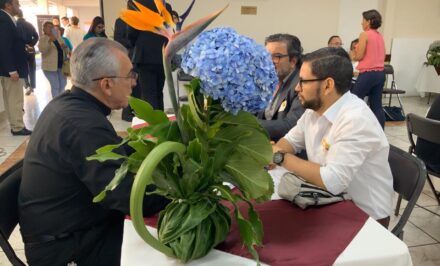