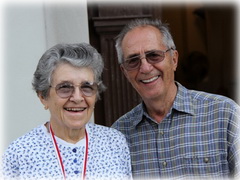 USA, Rainer Birkenmaier. Both were born in Hungary, but they only met and fell in love when they were refugees on their way to the USA. Through a friend they finally arrived in Milwaukee on separate routes. Now, on 25 March they are looking back on sixty years together. 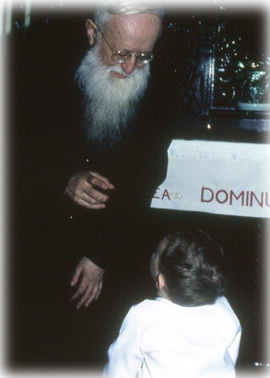 In Milwaukee in the early 1960, while they were looking for suitable religious instruction for their eldest daughter, Belinda, the Horns were told that at the same time as the children’s catechism class there would be Holy Mass in German in the lower church at St Michael’s.

Divine Providence had more in mind than a good solution to their need for catechism classes and Mass attendance. The young couple were introduced to a priest who they felt understood them.

It was Father Kentenich who was helping the refugees to live their lives after the War, which included forced displacement and emigration by faith. They gradually grew into Fr Kentenich’s spiritual world.

This meeting with him set its stamp on their entire lives – right up till today. Mr & Mrs Horn and the Founder were given to each other.

No family close by, but …

The young couple’s relations either lived in Germany or far away in another part of the USA. However, this priest was close by, and they simply called him “Father”. They could visit him at any time without an appointment; he seemed to have all the time in the world for them and took an interest in everything that occupied them – their children, work, fear of taking their driver’s test, unemployment, financial worries … There was nothing they could not ask Father. And he loved the children. When their youngest was critically burnt with scalding coffee during a family meeting, Father shared their anxiety and promised his prayer. “Little Peter” survived. He can be seen on a number of photos with Fr Kentenich.

More than anecdotes or “mosaic stones” 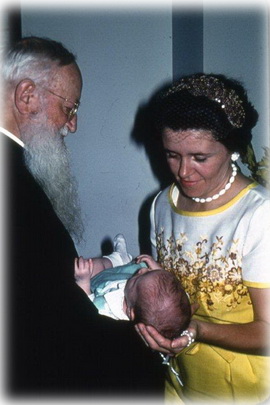 Anna and Andreas Horn are celebrating sixty years of sharing a permanent love story. It is impossible to separate this history from their loving relationship to Fr Kentenich. This bond is not something in the past; it is vitally alive still today. Since 1965 Mr & Mrs Horn have told countless visitors and pilgrims about Father. Yet what they give the Milwaukee pilgrims is more than memories of the past. Many pilgrims have said that in Milwaukee it is as though Fr Kentenich has come down from his pedestal and they have encountered him as a father, without losing sight of his greatness. People like the Horns have brought about this transformation, because Fr Kentenich lives in them as a person, as “Father”, and not just as an idea.

In the last sermons Fr Kentenich age in Spring and Summer of 1965 in St Michael’s, Milwaukee, he enlarged on the idea that the whole of life is a game of love. The Father in heaven is like the author and director of a great play, a comedy; we people are co-actors. What matters in our lives is to play our own specific role in the great game of love in a relaxed and generous way. What appear to be chance happenings in life are like the balls the Father throws towards us. Through them he invites us to play with him in a creative way, and to invite others to join in this game.

The lives of our Jubilee Couple illustrate how we are drawn into this great game. Mr & Mrs Horn discovered this guidance and summarised it in the name they gave to their home shrine: VICTORIA PATRIS. Those who get to know Anna and Andreas Horn are drawn into their joy that God has led them in this way. From what seemed like many chance happenings, the game of love has become their great happiness and blessing – not only for the Horns.