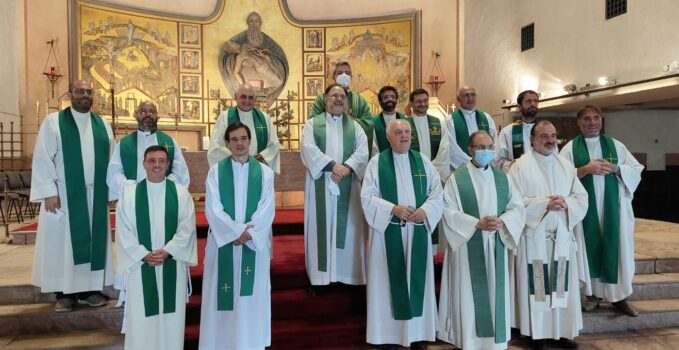 The Feast of Sion during the time of the regional chapter

Sunday, February 20, began with a light rain in the Florencio Varela area. It rained softly but constantly until the afternoon, which caused the Feast of Sion, on the 28th anniversary of the Shrine of the Schoenstatt Fathers, to move to the Church of Dios Padre, on the grounds of the Schoenstatt Sisters of Mary in New Schoenstatt. —

As in 2021, everyone was able to participate in person or virtually via YouTube transmission. About 600 people from different communities of Buenos Aires participated in the event.

Father Federico Piedrabuena presided at the Eucharistic celebration, at the beginning he asked that two Schoenstatters very close to the community of the Fathers who had departed to the House of the Father that morning be remembered at Mass: Juan Pol, Father Pablo Pol’s father (Rector of the Original Shrine) and the permanent deacon, Juan Carlos Lombardi, from La Plata.

The Mass readings were read by the three new Argentinean postulants, who are leaving during these days for Tupãrenda to join 13 other young men from other countries and begin the novitiate on March 13. They are: Francisco, from San Isidro; Jerónimo, from Tucumán and Agustín, from Rosario.

The shrine helps us to experience permanent conversion

In his homily, Fr. Federico referred to the Gospel (Luke 6:27-38) as a gift of the Lord that “challenges us, elevates our spirit as missionary disciples and invites us to enter into the logic of the Gospel that contrasts with human logic”.

Referring to the priests and the 28 years of the Sion shrine they were celebrating, he mentioned that, as a community during this chapter time, they were asking for the grace of discernment, of being more spiritual. It is the shrine that makes us more spiritual men, men of heaven, it helps us to the permanent conversion that Pope Francis asks of us and to deepen in our Schoenstatt charisma.

We have received the mission, the charisma of the founder Fr. Joseph Kentenich, who, ‘He loved the Church’ as his epitaph says, and he did it until the end, carrying his cross. “Fr. Kentenich is an example and a model of love and forgiveness, for us”.

It was impressive to see the altar of the Church of God the Father with 17 priests celebrating, surrounding the altar and accompanied by so many people, after so many months of confinement.

The voices of being, of the soul and of the time

Before the final blessing, the Regional Superior, Fr. Tommy Nin Mitchel, greeted those present and thanked the Sisters of Mary for their generosity in opening the doors for this celebration. He commented that the fathers were, in those days, developing the Regional Chapter to be able to see the voices of being, the voices of the soul and the voices of time. Fathers Facundo Bernabei and Beltrán Gómez traveled from Italy for this Chapter.

He also explained that this year the traditional lunch with choripanes and sandwiches had not been organized at the Joseph Engling Hall in Sion, since the place has been ceded to the local health authorities as a vaccination center against Covid.

Twelve blocks to greet the Queen of Sion

In procession, everyone went to the shrine where they renewed the Covenant of Love and the priests gave the final blessing. Then, everyone was able to greet the Fathers, especially those who live far from Buenos Aires and Florencio Varela, whom they do not usually see, and they were also able to get to know the novices better.

Some pilgrims, upon leaving, felt encouraged and walked the twelve blocks to the Shrine of Sion to greet the Blessed Mother and to pray for the priests and the new regional vocations of the Schoenstatt Fathers.