Shrine of Life and of Hope Tag 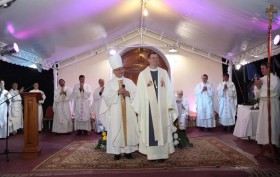 ARGENTINA, Córdoba, Juan Barbosa • On Saturday, 7 November, the first priestly ordination in its history was held in the Shrine of Life and of Hope: Juan Andrés Le Vraux is now a Schoenstatt Father. This celebration became a milestone that will remain forever in the Córdoba Schoenstatt Family’s memory. There were a thousand participants, a threat of rain, which in the end was delayed, and the presence of two bishops concelebrating along with more than thirty priests and seminarians. One of their sons, a member of the Boys’ Youth, whoRead More