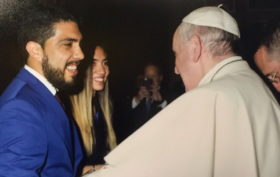 Posted On 16.09.2017In Dilexit ecclesiam, Schoenstatters

Interview of Darío Ramírez, Venezuelan, a political refugee in Panamá • Darío Ramírez, a young Venezuelan legislator, surprised Pope Francis and his girlfriend when he proposed marriage on Sunday 27 August, in the Vatican’s Clementine Hall. The proposal happened during a private audience Pope Francis granted to eighty delegates from different countries, who were participating in the annual meeting of the International Catholic Legislators Network (ICLN) in Rome.  It was a great surprise to see a picture of the Mother Thrice Admirable of Schoenstatt in the young Venezuelan’s hand. ThereRead More