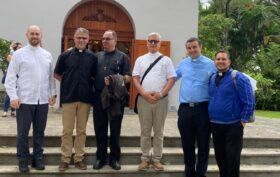 A meeting of fraternity and priestly formation

COSTA RICA, Fr. José Luis Correa • On November 4, a fraternity and formation meeting for diocesan priests was held at the Shrine of the Family of Hope, in Santa Ana, San José. — Fr. Erick Longan, bursar of the Archdiocese, Fr. Reyner Castro, who advises the Schoenstatt Rosary Campaign in San José, Fr. Joel Levi, a priest of one year of ministry, and Fr. Manuel Peña, recently appointed as a member of the Metropolitan Chapter, participated in the Holy Mass at the shrine and then had a fraternal exchange.Read More 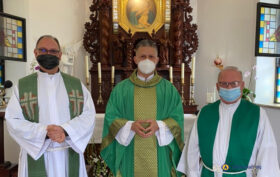 COSTA RICA, Juan Perez • On Friday, June 4, we celebrated the 25th anniversary of the priestly ordination of Fr. Reyner Castro, a member of the Schoenstatt Institute of Diocesan Priests from San José. — He presided over and preached the homily during the Mass at the Family of Hope shrine, accompanied by Fr Luis Herrera (they both sealed their Covenant of Love with the Blessed Mother a couple of years ago). After Mass, it was time to share a meal. Several other priests arrived, including the vicar of theRead More