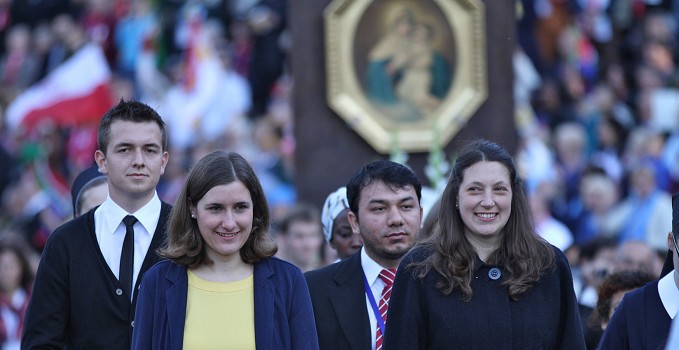 I fell in love with Mary

GUATEMALA, org. Marisabel Soto is a university student from Guatemala who fell in love with Schoenstatt, and she dreams of participating in the Movement in Guatemala.  Upon receiving her letter, the schoenstatt.org editorial team put her in contact with Father Miguel Rodríguez OSB, the initiator of Schoenstatt in Esquípulas, and who with Father Julío Celada, has placed the Schoenstatt Pilgrim MTA on pilgrimage in Alto Veracruz in the northern part of the country.  In her letter, Marisabel tells a story of encounter with Mary through Schoenstatt…and counting on the solidarity of Schoenstatters online, perhaps the true story of the beginning of Schoenstatt in another part of Guatemala, in Fraijanes, approximately 40 km. south of Guatemala City.

I fell in love with Mary.  I never believed that this would be possible.  For a long time, I believed that the Virgin Mary was not important.  I did not know her role in salvation very well or in the Church, much less in my life. And that kept me from taking an interest or having a relationship with her.  Moreover I did not have it for a long, long time.

However now, I cannot imagine my spiritual life without her being at my side praying with me, and without her, I would not be the person I am today.  What changed?

I went to study at the University of Texas in Austin three years ago.  María Pía and Andrea (ladies who are consecrated in Schoenstatt) invited me many times to SUW (Schoenstatt University Women) retreats, and I conceded to go to one just so they would not ask me again.  It only took 48 hours to be surprised…I had never learned as much about Catholicism as I did that day.  It had not crossed my mind that if Mary is taken away from the Catholic faith, many other things are also taken away…

My life was not the same again.  I began to have a very intimate and wonderful relationship with her, and I am brought to tears just thinking about it.  I made my covenant of love with her after the inauguration of Bethlehem, Cradle of Sanctity Shrine (“Bethlehem, cradle of sanctity”) in September of last year.

This year I returned to Guatemala, my country of origin.  I cannot explain how much it hurts me to be far from Mary’s Shrine in Austin.  I would like to be able to go there everyday and to stay in her presence.  I do not know another movement in Guatemala that transforms youths and that inspires them to be saints like Schoenstatt does. (And I have eagerly looked for it).

I feel a great desire to serve Mary and to bring Schoenstatt to Guatemala, because having experienced the transformation that Schoenstatt brings, I cannot imagine that others have not had or will have this experience.  It is urgent to bring this Marian Movement to Guatemala because the people need it.

Three months ago, I began to make contributions to the Capital of Grace with my family so that the Blessed Mother will bring the Movement here to us.  I have a Pilgrim MTA in my home with which I began the Rosary Campaign.  But in my heart, I feel that we need a Movement priest who will come with the mission to bring Schoenstatt and a Shrine here.  For the moment, we have a priest in Esquípulas (very far from the city) who visits us once in a while, but we need something more.

When the 100 years were celebrated in Rome, the Holy Father told the Schoenstatt youths this:

“I repeat this often. A Church that does not go out is a Church of snobs. An ecclesial movement that does not go out on mission is a movement of snobs. Furthermore, instead of going out to find sheep, to bring, or help, or give testimony, they dedicate themselves to their little group, combing sheep, not so? They become spiritual hairdressers. That’s no good!

A Church or a movement, a community that is closed becomes ill. It has all of the sicknesses of isolation. A movement, a Church, a community that goes out makes mistakes, makes mistakes. But it is so beautiful to ask for forgiveness when we make mistakes. Therefore, do not be afraid. Go out on mission. Set out on the road. We are on a journey. But be careful, St. Teresa warned, that along the way, we find a beautiful place we like and we remain there, no? We forget that we have to continue on our way.”

I do not know whom I can speak with about this, since Schoenstatt is not very well known here.  I am sending you this letter because I miss the Movement very much, and I found out that there are priests in Chile, who have visited several countries of America.  It would be a blessing if they would visit Guatemala since it is a beautiful country.

It is very necessary to transform the youths and to make them see that they can aspire to be good persons who take holiness seriously.  For Guatemala, for the Church, and for the glory of God.

If someone knows whom I can contact to speak about the possibility of starting the Movement over here, I would appreciate it very much.  At the moment I do not know where to start and I do not know whom to contact.

I have you in my prayers.