USA, Carlos Cantu. We could not have prayed for nicer weather! Although it was still somewhat warm, a gentle and cool breeze would come along just at the right time to refresh us and remind us of the loving presence of our dear Mother Thrice Admirable, Queen and Victress of Schoenstatt. Our hearts and minds, welling with gratitude, could not express sufficiently our thanksgiving on this the Golden Jubilee of our Confidentia Shrine. 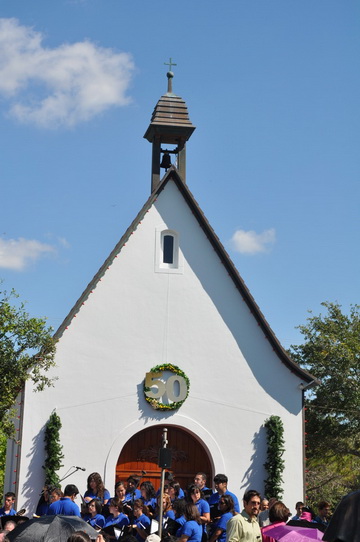 How can one express thanksgiving for the greatest of Jesus’ gifts which He has to offer us… His Mother! And She, for fifty years, since She established herself in her Confidentia Shrine, has listened to our prayers… she has given us a home… she has healed our wounds… she has taken care of a multitude of needs… and she has led us into a deep relationship to the Triune God. The fatherhood and spiritual presence of our father and founder, Father Joseph Kentenich, has deep roots in Texas, not only because he visited our Texas land in 1948, but also because he himself sent us the gift of our Father Eye Symbol which dons our Confidentia Shrine.

“Build Her a Shrine, and She will do the rest”

During the two-day celebration which took place on October 17th and 18th, 2009, we remembered the three courageous and spirit-filled Schoenstatt Sisters of Mary who braved the ocean blue and sailed from South Africa to Texas. Srs. M. Hroswitha, M. Renata, and M. Clementia were on their way at the bidding of their father and founder. They were coming to build a Shrine for the Blessed Mother and to foster the Schoenstatt spirituality among the people. “Build Her a Shrine, and She will do the rest,” he told them. With very little money at hand, they prayed about how they would get from Mobile, Alabama to Corpus Christi, Texas. The matter was confidently entrusted to their Mother and Queen. She would take perfect care! Not only did She take perfect care, but already she provided a hint of the special mission for Texas. A hurricane in the Gulf of Mexico made it impossible for the sailing vessel to reach its destination, Mobile, Alabama. The ship would have to dock in Corpus Christi, Texas! Unlimited, childlike, victorious confidence would be the way from that moment on. 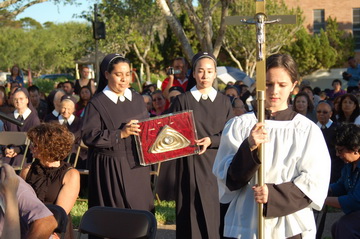 Approximately 850 persons gathered on Saturday the 17th, and 1,000 gathered on the 18th at the Confidentia Shrine which was offered as a gift of thanksgiving in advance for the liberation of Father Kentenich from his exile. Many other Sisters followed the first three to Texas, and Father Kentenich himself sent Father Peter Locher, our first Schoenstatt Father to Texas. We are greatly indebted to all our Schoenstatt Sisters and Schoenstatt Fathers for giving of themselves so generously to us. We gratefully remember those Schoenstatt Sisters of Mary who have gone on to the eternal Schoenstatt. Their unselfish service contributed to our being here today. 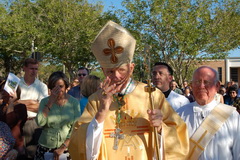 The Most Reverend Bishop Edmond Carmody, Bishop of the Corpus Christi Diocese, presided at the outdoor Mass on Saturday, October 17th. We delighted in the rhythmic sounds of the Mariachi band who provided the music. In his homily, Bishop Carmody expressed his gratitude to the Schoenstatt Movement and its efforts for evangelization. Before leaving, Bishop Carmody greeted the Blessed Mother in her Confidentia Shrine. After Holy Mass, we enjoyed a visual presentation which highlighted the history of Schoenstatt in Texas. Everyone was then treated to a delicious BBQ supper ala Texas style. After supper, several individuals gave presentations. One of the presentations was given by Virginia Gallegos, the first leader of the Schoenstatt Girls’ Youth in South Texas. With great inspiration, not only did she share about the girls’ youth, but she also demonstrated how her attachment to the Shrine and the Blessed Mother has helped her with the various milestones in her own life. 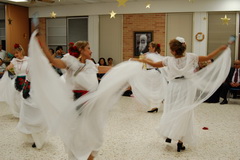 A group of ladies from San Antonio then performed a lively Mexican dance…..and the music and dancing continued for a good while.

A talented choir which serenaded the Blessed Mother began anew the festivities on Sunday, October 18th. Following the serenade, the Schoenstatt Movement from the Dallas and Fort Worth Dioceses performed a thought-provoking VER SACRUM play. The Eucharistic Celebration which followed was presided by Fr. Héctor Vega, a Schoenstatt Father who is the Director for the Schoenstatt Movement in Texas. His eloquent words in his homily also emphasized the Texas mission of unlimited, childlike, victorious confidence and how the Blessed Mother has proven that She takes perfect care. 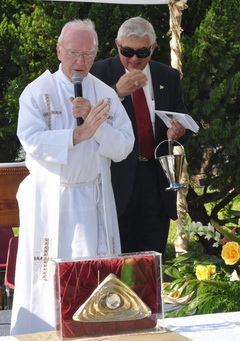 After a delicious lunch, Sister Mary Martha Rodríguez, gave a noteworthy presentation. She highlighted the work of the Schoenstatt Sisters of Mary, the importance of the Shrine, the mission of unlimited, childlike, victorious confidence, and the attachment to our father and founder, Fr. Joseph Kentenich. Everyone then participated in a devotion, benediction, and the renewal of the Covenant of Love. The Archdiocese of San Antonio was commissioned to receive the International Father Eye Symbol which will now travel to the various dioceses in Texas.

Congratulatory letters were read from Sister M. Jacoba, Superior General of the Schoenstatt Sisters of Mary, Fr. Gerold Langsch on behalf of the Schoenstatt Fathers in the USA, and Bishop Tamayo from the Diocese of Laredo in Texas.

The Blessed Mother and her Confidentia Shrine received many gifts and contributions from the Institutes, Federations, Rosary Campaign, and individuals from throughout the various dioceses where the Schoenstatt Movement is present in Texas. Visitors came from many places in the USA and several countries. Many had the joyful experience of visiting with long-standing Schoenstatters they had not seen in many years. The celebration could not have ended without receiving a memento and the famous Shrine cookies. 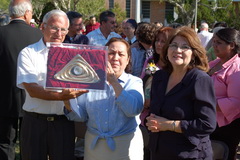 In unlimited, childlike, victorious confidence, the Texas Schoenstatt Family now goes into the newest times, rejoicing at the expectation of the great celebration in 2014.