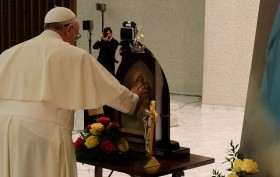 VATICAN, Sr. M. Elizabet Parodi. I've just returned from St. Peter's Basilica. It was packed, as it always is when the Holy Father celebrates a liturgy. Today, two years since he started his pontificate, Pope Francis presided over a penitential liturgy. During the homily, in which he spoke about how God never tires of forgiving us, he announced that he had made a decision: with words that seemed to come from the depths of his heart he said that he was proclaiming a 'Holy Year of Mercy' which will beginRead More
1234