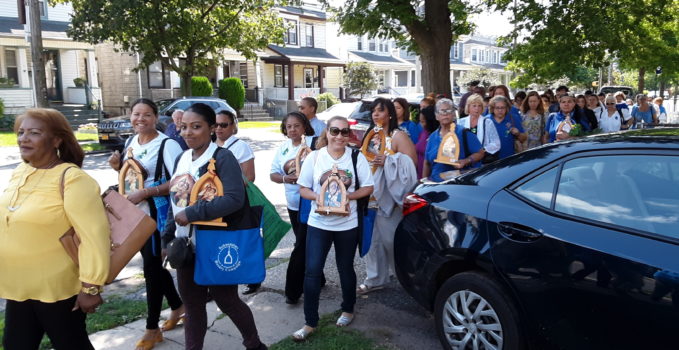 On Sunday, August 25, 2019, at the Candelaria Shrine on Staten Island, the Schoenstatt Family from New York City and surrounding area states re-crowned our Blessed Mother as Queen of Light. This was a Covenant Love celebration that had been prepared in the preceding months, so that an integral part was the exchange of covenant gifts and petitions on our part to our Mother Thrice Admirable, Queen, and Victress of Schoenstatt with her six-fold covenant promises and requests to us. Various parishes and groups of the Pilgrim MTA Apostolate were visited during August to notify Spanish-speakers about the invitation for the 40th anniversary. —

Prayers were answered when the first order of roses failed to arrive on time, making it necessary to purchase100 roses the morning before the celebration. Sister M. Jessica and Marta Luciano found Ocean View Flowers, which is literally on an exit ramp right near Coney Island. Sister Mary Martha used the roses to prepare a fitting throne in the shrine. Another great answer to prayer was the outstanding weather! What a gift to have a perfect weather day since that hasn’t been the case in New York this year! 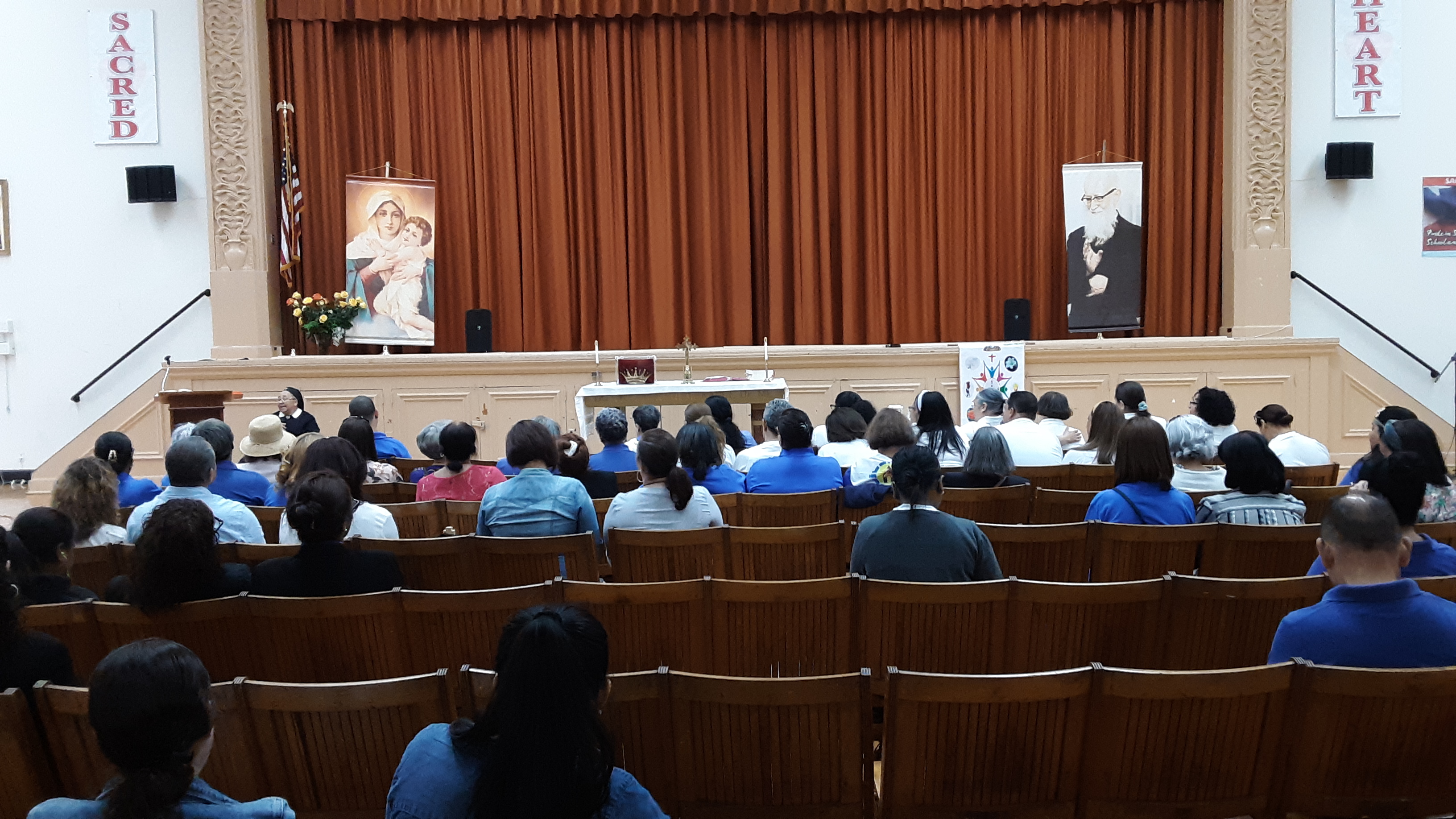 People arrived around 10:00 am; some first went to 1000 Castleton Avenue to the world’s first Founder Memorial. Arismendy Taveras began the celebration there. Then the Spanish group processed with the crown to Sacred Heart School auditorium, where after introductions by MC Wanda Ortiz, Sister M. Georgina spoke to a crowd of over 120. Simultaneously Sister M. Barbara gave her talk to an English-speaking group of twenty that had stayed gathered at the Shrine of Light. Sister related the forty-year history of Father Kentenich’s personal crown gift to his Schoenstatt Family there on Staten Island. She then explained how the ceremony would proceed with an offering of the spiritual gifts, petition slips, and the procession from the auditorium to the coronation ceremony at the Shrine.

After the talks, everyone enjoyed chatting and visiting while enjoying their bag lunches and provided beverages. The English-speakers stayed in the Movement hall below the Shrine and the Spanish-speaking group met in the school cafeteria, where many spontaneous testimonies were offered at the microphone. For instance, Teodula Vazquez brought the crown she had made with her children for the original crowning. Each item on the crown represented a sacrifice. This was an excellent example of the crowning stream that penetrated the lives of early Schoenstatters in New York. Tawanna Ortega was there and shared about her early years as a Schoenstatt girl; Janet Tetlus contributed additional comments.

Before Holy Mass, which began in the auditorium shortly after 1:00 pm, Sister M. Georgina was presented with tokens of appreciation for time, love, and effort in developing Schoenstatt in the entire city and beyond. The number of people swelled to 200 when hearts and minds united at the Mass for the 21st Sunday in Ordinary Time. A five-member choir and guitarist performed songs. Father Hugo Tagle, a Chilean Schoenstatt Father working in Austin, Texas, gave the homily combining the importance of knowing which path leads to salvation, the law of the open door, and the historic importance of confidently trusting our MTA would intercede in new miracles.

After Holy Mass, Kirnelys, who carried the crown, the pioneer Schoenstatters, and those recently having made the Covenant of Love, Blank Check, or were implanted into the Mariengarten, led procession to the shrine. Everyone else in attendance followed. Each person was given a booklet with the ceremony in both English and Spanish. The first people in the procession each had a rose and crown badge. These were designated to remain in the shrine. Others processed to the backyard, where they saw and experienced being present in the shrine by means of closed-circuit transmission (masterminded by Efrain Ortiz). Father Hugo Tagle placed the crown on the MTA picture as Queen of Light.

There was even an opportunity for long-distance participation while the ceremony was taking place with the suggestion of using a cell phone to contact one of the leaders in Florida. Theresa was so happy about this that she cried! After this solemn coronation, the people in the shrine went outside through the back porch, allowing those outside to enter and pay homage to the re-crowned queen by offering their spiritual gifts and leaving their written petitions. 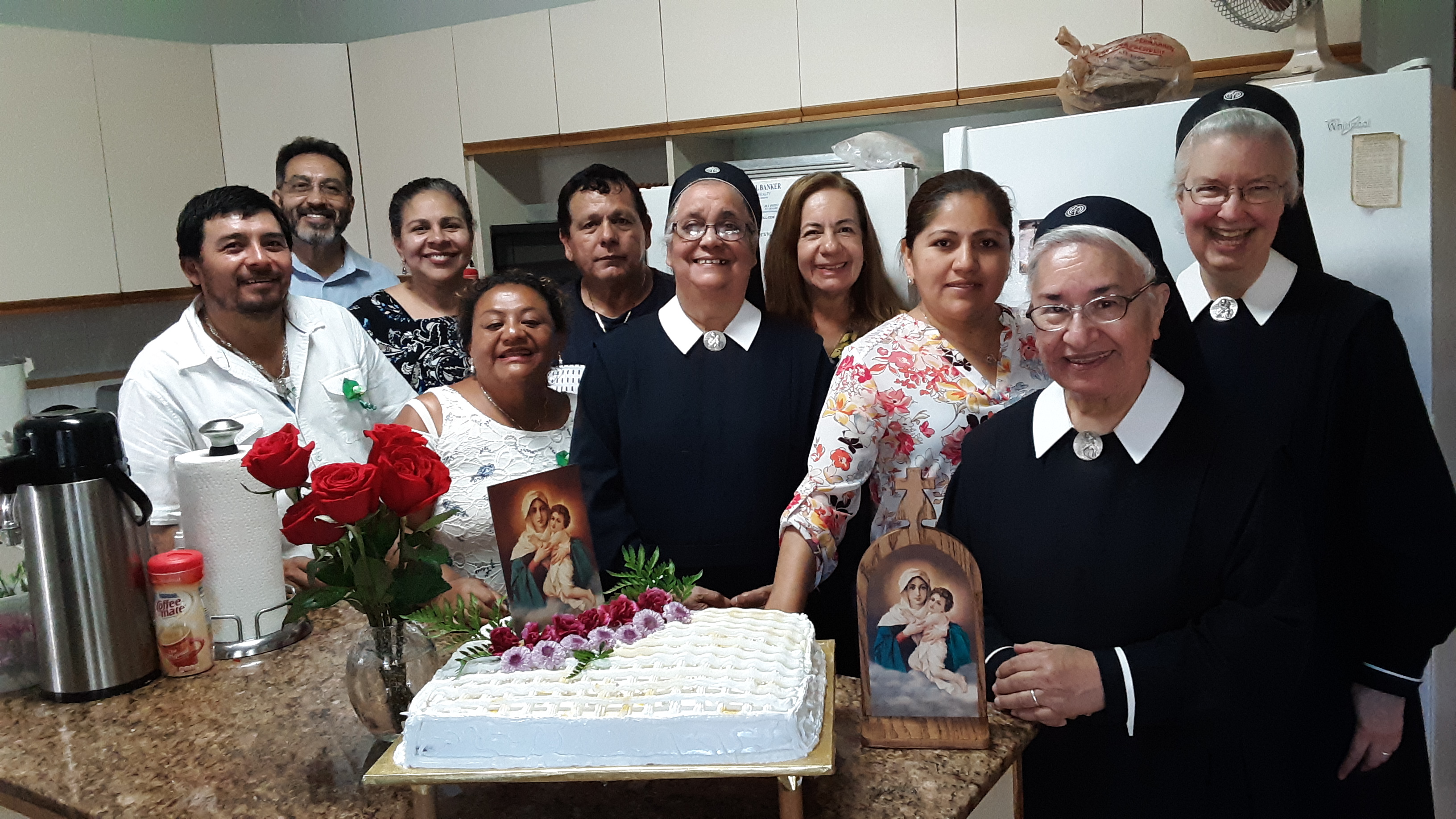 A family celebrates, cleans up, and then sets out

The big back yard was picture perfect for gathering while refreshments of sheet cakes, coffee, and soda – all provided by different groups – were served. There was also an opportunity to visit vendors set up under bright orange tents. Everyone enjoyed the backyard relaxed setting, chatting with one another, and taking pictures while children sat on the chair swing and nursing moms lined their baby strollers near the gazebo and visited with one another. Meanwhile, fifteen Pilgrim Mothers for Spanish-speakers were being sent out from the Shrine of Light, and coordinators (missionaries) were being commissioned or re-commissioned.

People were so helpful and industrious with a speedy family-shared clean up that by 5:00 pm chairs were put away, the four tents were down, the screen was returned to its place, the shrine’s pews were put in order, the hallway and bathrooms were cleaned, and Veronica and Luis’ guava-filled meringue cake was sent home with workers (due to the generous heart of our kitchen, Sister M. Vanessa), and the last people were saying farewell to Sister M. Georgina as they left on public transit. 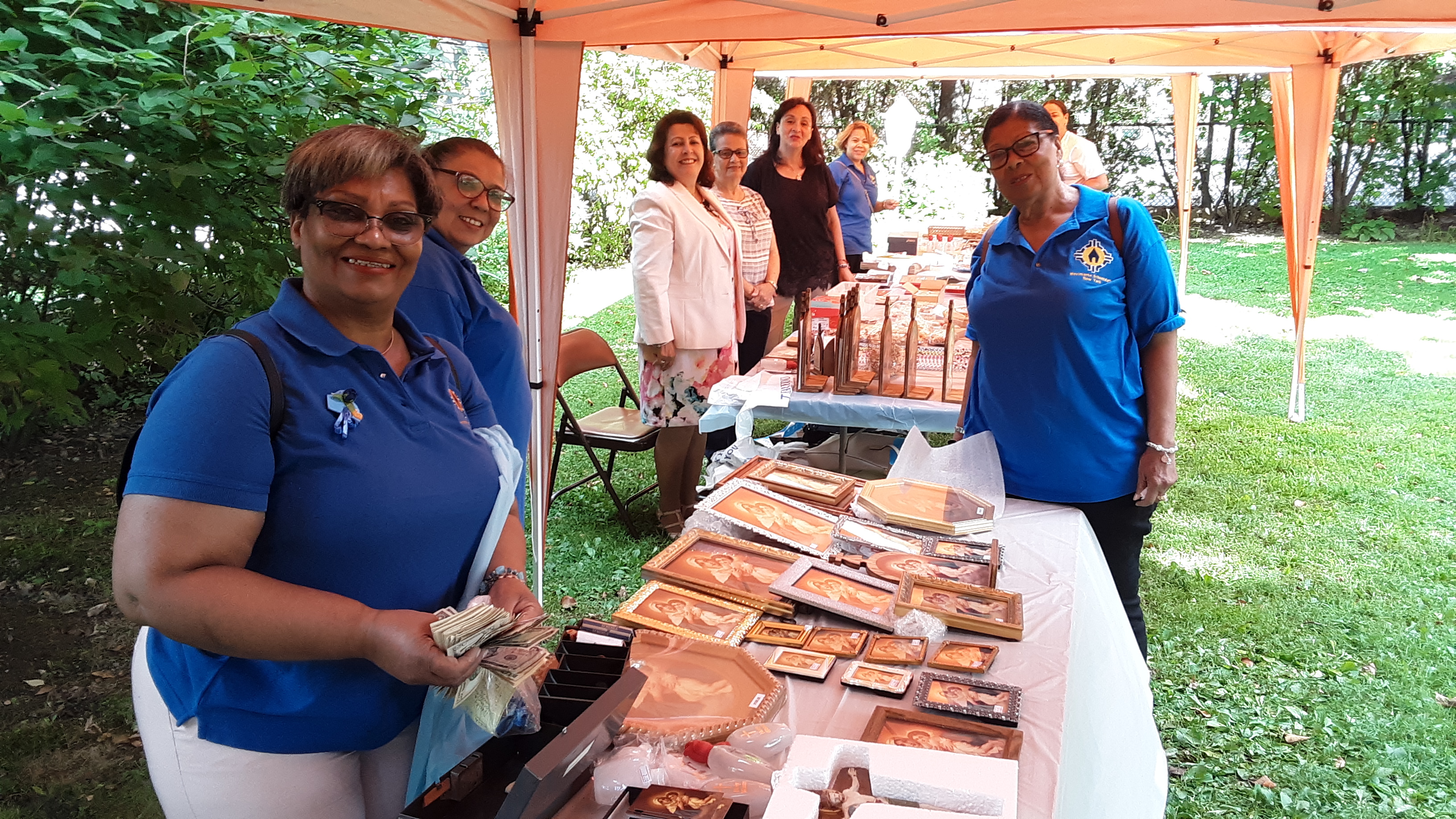 Everyone wanted to linger in the Shrine of Light a bit longer as Father Kentenich’s words ran through our hearts and minds: “Look here at the wonderfully beautiful crown. You will receive it when you have fulfilled our petition. And if you do not fulfill it, you will not receive a crown. Therefore, if you have the longing to receive a crown and to receive it very soon, … a crown, a most beautiful crown… then you know what you have to do.”

The Sisters and Movement in New York had experienced the motherly care, the queenly influence, and the powerful victory of the MTA.  Everyone could pray with our Father and Founder, “With heartfelt love I thank You, Mother dear…” 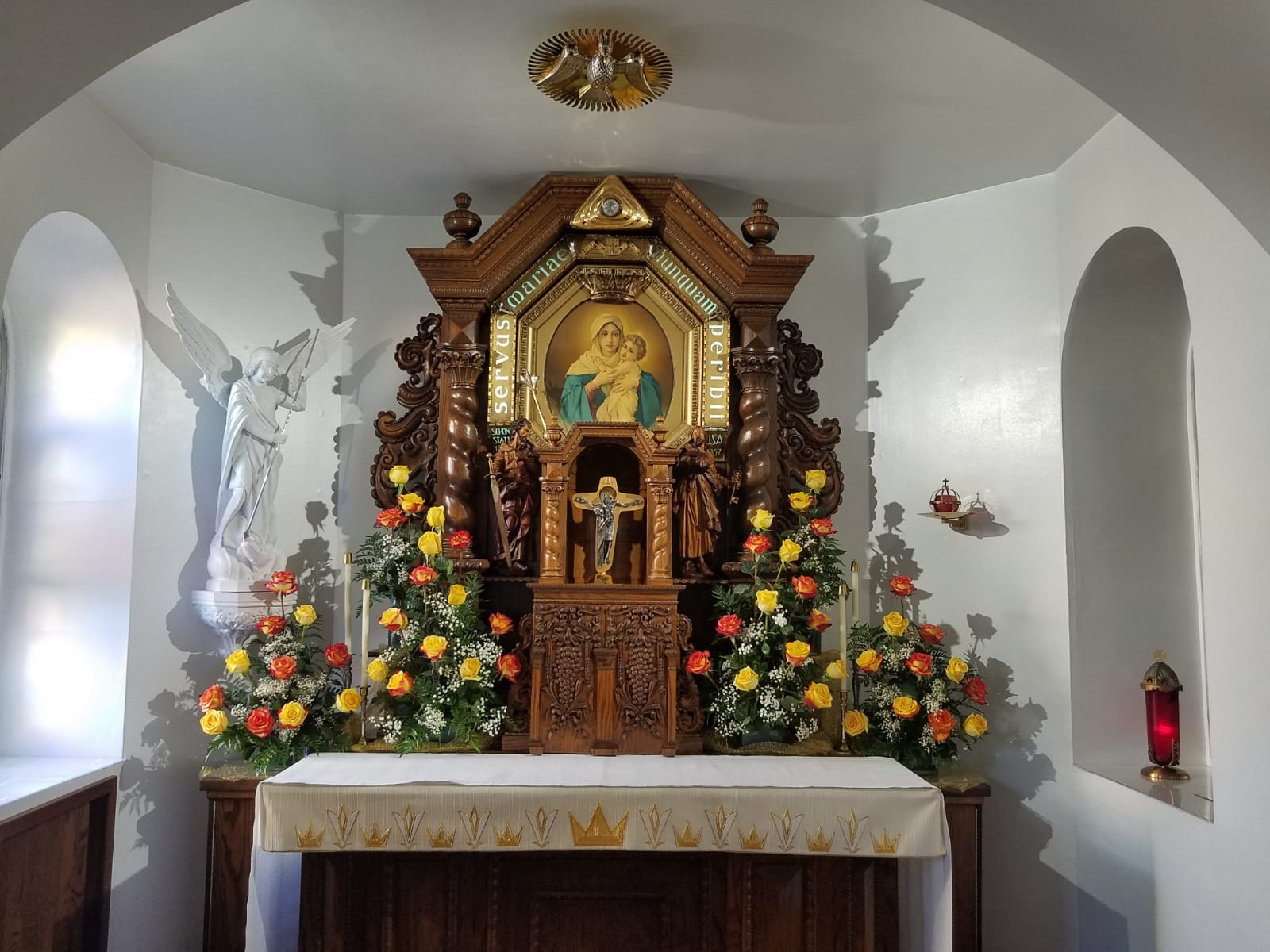