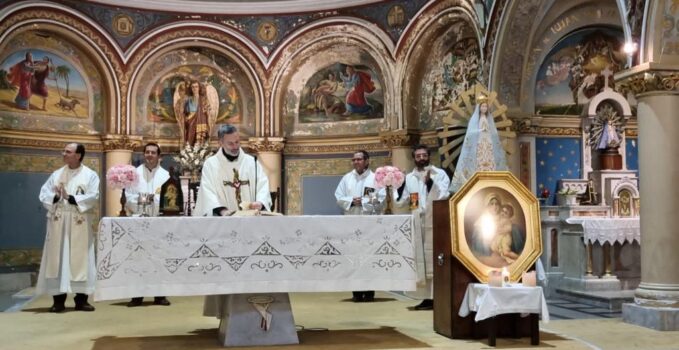 On May 31st, the Visitation of the Blessed Mother, we enthroned the MTA in our parish of St. Raphael the Archangel, in the neighborhood of Villa Devoto. The conquest of the image, an octagonal picture like the one in the daughter shrines, began as a result of a visit of the Blessed Mother. —

The picture of the Blessed Mother belonging to the Federation of Diocesan Priests was with us at the end of October of last year. It was exhibited on the altar of the Sacred Heart, and from that moment on many people began to show their affection and devotion to Her. It happens that our neighborhood was already familiar with the Virgin of Schoenstatt, mainly thanks to the constant presence of the Rosary Campaign and of the Pilgrim Mother, and to the prayer of the thousand Hail Marys that is done every year on the occasion of the patron saint’s feasts. Furthermore, in December 2020, three women from our community had sealed their Covenant of Love in the Belgrano Shrine and then they, along with others, had also begun to go on mission with the Pilgrim MTAs, especially by giving them to people who came to Mass and who perhaps we had not known before. That was how our Mother began to sow her Kingdom among us. 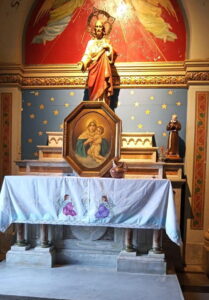 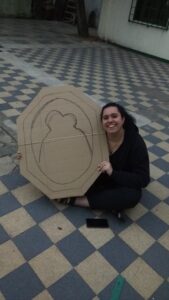 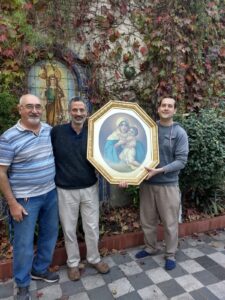 Fathers Martín and César with Sindo, who made our painting

A great yearning was awakened 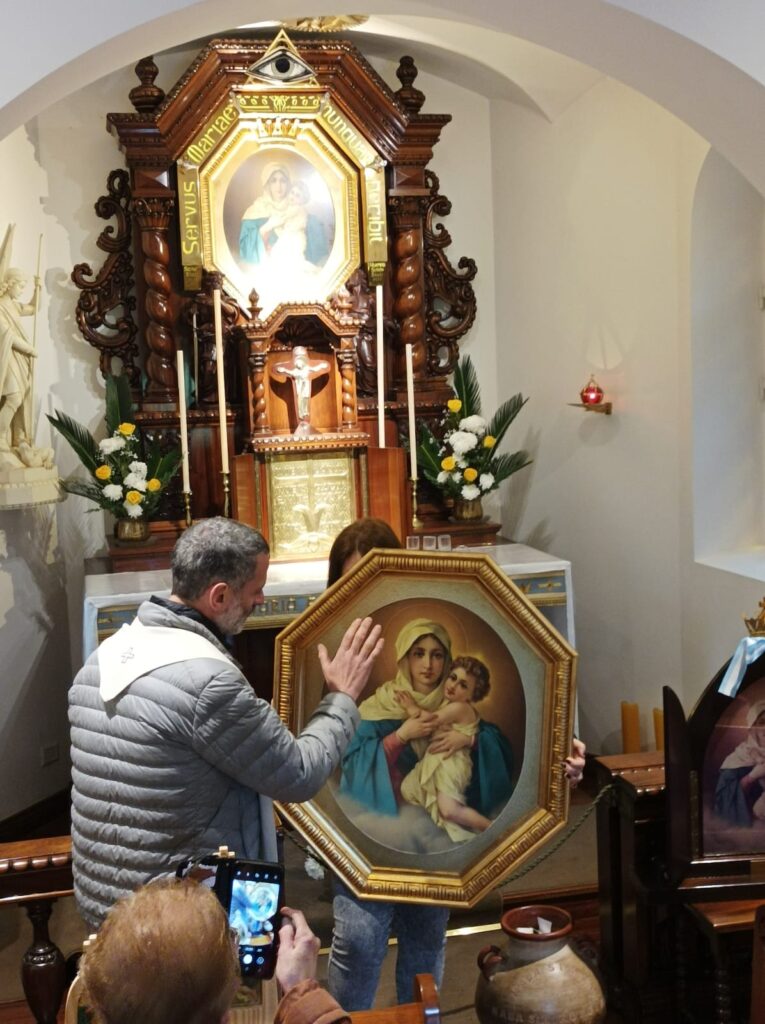 Blessing of the painting at Florencio Varela

When we received the picture from the Federation of Priests, the first thing we did was to begin a capital of grace, explaining to everyone who passed by the picture that they could contribute with their small daily offerings. We also wanted to give the Blessed Mother a covenant circle, which was sealed on December 8, 2021, the Feast of the Immaculate Conception, in the Belgrano Shrine. When the new allies learned that the picture of the Blessed Mother would only stay for a while and that soon she would surely visit another parish, there was a great desire for the Blessed Mother to also establish herself among us. From the beginning we decided that our conquest had to be spiritual, that we had to show Our Lady, with all our love, that we wanted her to stay among us. She would have to show us, that she wanted to choose this place to establish her throne. We got down to work and began to fill a cardboard capital, in the shape of the octagonal square.

The original date on which we dreamed of doing the enthronement was March 25th, the Annunciation. For that day we also organized another covenant circle. But when the time came to commission the painting, we found out unexpectedly that it could not be finished until mid to late April. We were determined to interpret everything as the will of Divine Providence: God would have other plans for us to receive our Mother. So we looked for another significant date for the Blessed Mother, which would be past April, and we found May 31st, the day of the Visitation of the Virgin Mary and a very significant date for Schoenstatt.

We set the enthronement for that day and ordered the picture. We never made any effort to ask for the money that was needed. All our energy was in the capital of grace, although people knew that if they wanted to, they could donate. However, the day we ordered the painting and received the updated price, when we counted the money, we didn’t have a single peso to spare! Mater perfectam habebit curam!

Grant me to remain with my heart close to yours…. 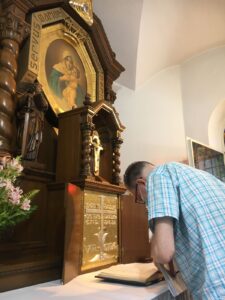 A few days after sealing the covenant of March 25, one of our December allies, Carlos Adrio, went to heaven. He had offered all his illness and sufferings to the Blessed Mother. We were able to experience how she was faithful to her covenant. When Carlos could come to Mass on Sundays, he would stick a small piece of paper in the capital to offer all that he was experiencing: “Grant me to remain with my heart close to yours so that I may be a reflection of the love of your Son to those around me, and give faithful testimony of the love of the Father. This is how he prayed at the end of his covenant prayer. And so it was. We had in Carlos a living testimony of the power of the covenant of love, in which he decanted the love he had had for the Blessed Mother all his life. He was a true son of Lujanera, who loved to serve at our health post during the October pilgrimages, and spent long periods of time contemplating her image. A love that we are sure was returned.

The MTA picture would visit the houses in the neighborhood

Finally, our picture was ready on Holy Saturday. We shared the joy with everyone. Sister Maria Julia reminded us that the original picture also arrived during the Holy Triduum at the train station in Vallendar in 1915 and that the Pallottines had to make a great effort to be allowed to take it back. We had to wait until the following week, and our picture arrived in the middle of the Easter Octave.

Just as the Pilgrim MTAs had been touring homes, we immediately felt that the picture, which was to be enthroned on such a significant day as the Visitation, could not sit still for so long until the date arrived. The MTA picture would also visit the houses in the neighborhood until the day of her enthronement. She also visited Lujan on May 8th, the Florencio Varela Shrine on May 25th (where we blessed it in a touching family celebration), and the Belgrano Shrine on Saturday, May 28th, the day on which we again gave our beloved Blessed Mother covenants.

And so the 31st arrived. So many things in such a short time…! We had no doubt that the Blessed Mother had already begun to work miracles of grace among us. Since 11:00 a.m. our community, along with the allies, more than 40, had been praying the one thousand Hail Marys at the place of the little altar on which we would enthroned the picture, ending with an illuminated rosary before Mass. 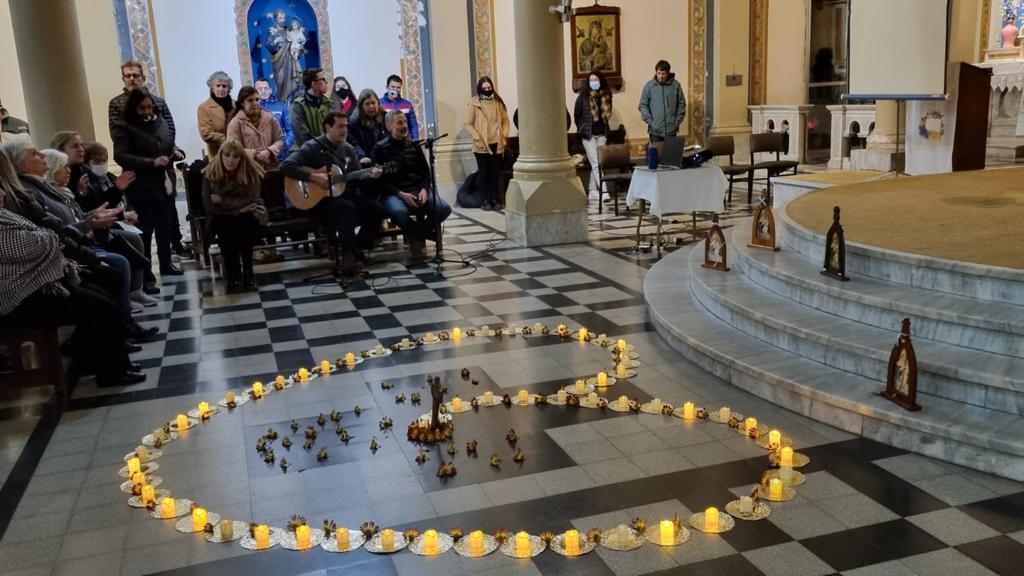 No one wanted to miss this feast

It was a beautiful day, crowned by the joyful celebration of the Eucharist, presided by Fr. Cesar Femia, accompanied by Fathers Pablo Perez, Santiago Aduriz, Jose M. Vallarino, and Martin Clavijo. At the end of the celebration we carried the picture in procession to the place where we were going to place it. There it was consecrated and blessed, asking the MTA to shower abundant graces on her children who visit her. Then, while singing the Hail Mary, we all offered carnations to the Blessed Mother at the bottom of her altar. Our Mother wanted the celebration to be truly family-like and we were joined by the branches, federations and institutes of the Movement, with whom we have been bonding during this time, like a big family, and many more who did not want to miss this celebration. 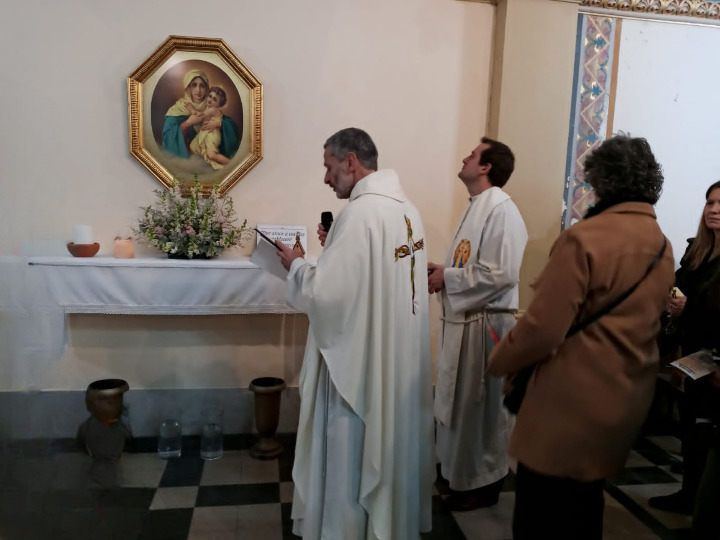 We need to mention someone who, we believe, played an especially symbolic role in the midst of all this: St. Joseph. His pilgrim image, a replica of the one in the Basilica of Flores, visited us at the end of October 2021, for our patronal feasts, just before the federation picture visited us. It was a beautiful visit, but it was more than that. When, a few weeks ago, we began to smooth the wall between the image of St. Cajetan and that of St. Joseph in our parish, everything began to get dusty. But, remarkably, St. Cajetan, who was on the left, was not covered in dust. Who got all dirty when we prepared a place for Our Mother? St. Joseph, her most chaste spouse, who is on the right! May we too continue to get dirty in order to extend the Kingdom of our dear Blessed Mother: Mother, work miracles of grace among us, but please do not do it without us! Nothing without you, nothing without us! 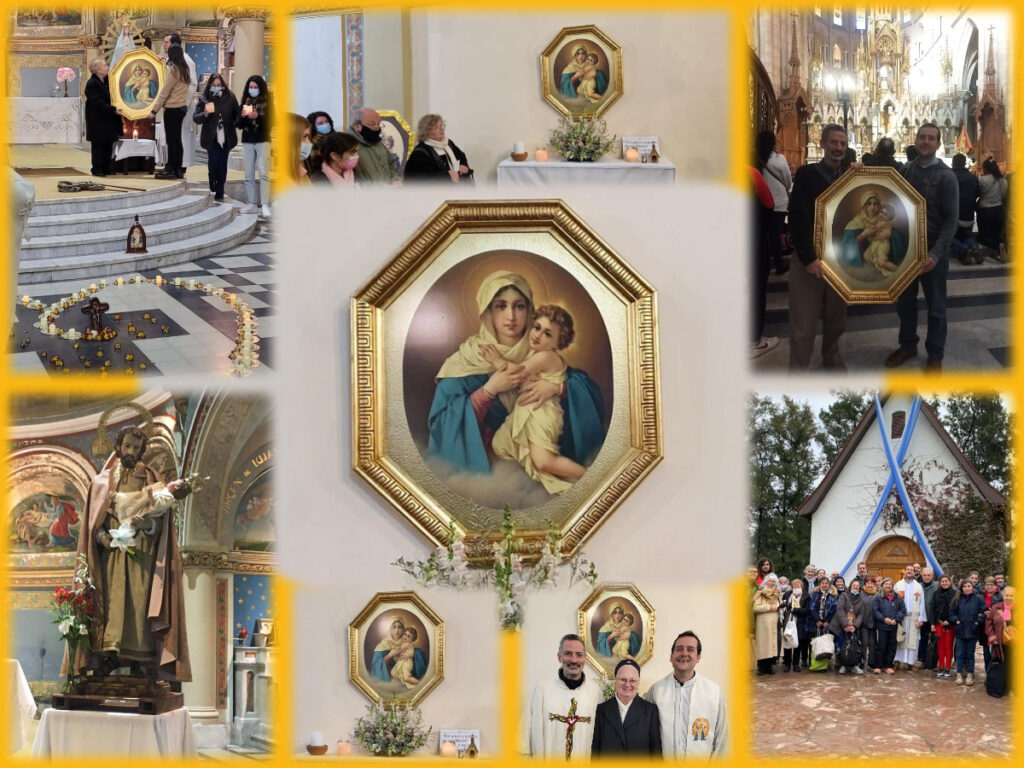