In the Spirit of Responsible Solidarity

VATICAN/G20, MESSAGE OF POPE FRANCIS TO THE G20 • While cars were burning in Hamburg’s streets, businesses looted and stones were flying, and the “most powerful man in the world” was absent from the consultations of the heads of government of the most powerful economic, and hence political, nations on climate change, a man “from the end of the world” addressed a message to the hostess of the summit conference and its participants. Modest, yet passionate, his message is probably well known to all of us from his encyclical EvangeliiRead More 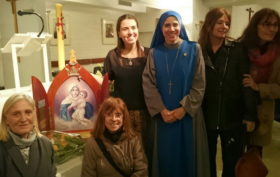 ARGENTINA/SYRIA/IRAQ, by Cristina White • Sr. María Guadalupe, from Argentina and missionary of the Incarnate Word has carried out her apostolate in the city of Aleppo, Syria for five years. During the past few months, she has been in Argentina in different areas giving her testimony. It is very difficult to hear the heartbreaking reality of the war, from the protagonist role at the service of the sorrow, and the atrocities that she defines as genocide. To hear her provokes a tremendous inner quivering, and one cannot be indifferent toRead More