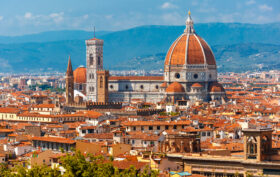 ITALY, Fides Agency • Today, Wednesday, February 23, the unique meeting of Catholic Bishops and Mayors of Mediterranean countries met in Florence to attest and re-propose the role of the Mediterranean Sea as a “frontier of peace”, in the wake of prophetic intuitions cultivated during the Cold War years by the great Florentine Mayor Giorgio La Pira. The meeting began this afternoon with an introduction by Cardinal Gualtiero Bassetti, and will end on Sunday 27 with Holy Mass celebrated by Pope Francis in the Basilica of Santa Croce. — DuringRead More