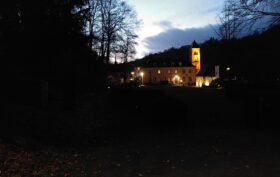 Dr. Peter Wolf to a prayer from “Heavenwards” • On March 25, 1945, the Americans entered and occupied Vallendar, 75 years ago. On March 7, 1945, US troops in Remagen had succeeded in breaking through the Rhine. The Allies rolled up the Rhineland with massive tank units and the support of their air force. Day by day they were coming closer to Vallendar and thus to Schoenstatt. In the Dachau concentration camp, where Father Joseph Kentenich, the founder of the Schoenstatt Movement, was imprisoned as a Nazi prisoner, there wasRead More