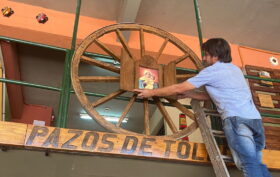 PARAGUAY, Natalia Regúnega • It was a great and pleasant surprise the one that Juan Vicente Ramirez shared a couple of days ago. A couple who are members of CIEES (International Community of Schoenstatt Businessmen and Executives) installed an altarpiece with the picture of the Mother Thrice Admirable of Schoenstatt at the main entrance of their warehouse Pazos de Toledo, a loading and unloading warehouse in Ciudad del Este. —  Why? Natalia and Saúl explain: After a nice work experience in Ciudad del Este in 2019, we decided with ourRead More 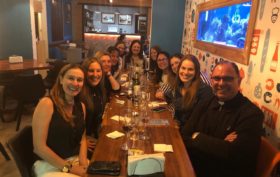 COSTA RICA, Amparo Ruiz, Maria Fischer • “We tried to build a “Shrine without walls”, where roses bloom on the barbed wire of competition, negative criticism, jealousy, pressure, fear, and the pain of so many people… The idea that our workplaces can be places where Christ is born again encouraged us greatly”. A comment from Gabriele Sudermann, Germany, from the Apostolic Women’s League (LAF), pronounced almost twenty years ago and found in an article from schoenstatt.org, today moves and motivates Amparo Ruiz from the Schoenstatt Family Work in Costa Rica,Read More