We take the first step Tag 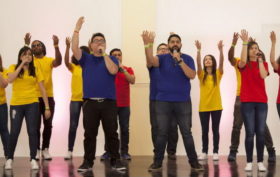 “Let us take the first step”: The official hymn for the Pope’s visit to Colombia

COLOMBIA, Aica • This past Wednesday [3 August], the official hymn for Pope Francis visit to Colombia on 6-10 September was chosen. The winning song, called “Let us take the first step” (in keeping with the motto of the papal visit), was composed by Carlos Corvacho and performed by the United Catholic Musicians group, who competed with nine other finalists from around the country. More than 400 entries were received when the call was put out.  The jury consisted of singers Fanny Lu and Maía. The jury who elected it,Read More