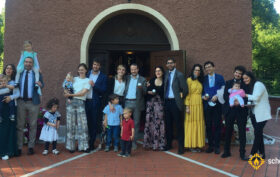 ITALY, Gian Francesco Romano • Sunday, May 30, on the Solemnity of the Most Holy Trinity, a small group of young families who were accompanied by the Schoenstatt Movement in Rome finally sealed the Covenant of Love with Mary. After approximately two years of preparation, between education, pandemic, reflections and new beginnings, six couples decided to entrust their family journey to Mary, the Mother Thrice Admirable, Queen and Victress of Schoenstatt. — The road… troubled The proposal to seal the Covenant of Love with Mary came about in the fallRead More 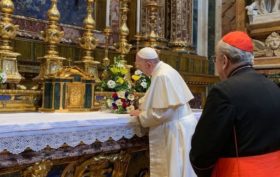 WYD2019/POPE FRANCIS, via ACIprensa • On Tuesday 22 January, Pope Francis visited St. Mary Major Basilica in Rome to entrust his visit to Panama, which will begin on 23 January, to attend the World Youth Day.— The director of the Holy See Press Office, Alessandro Gisotti, wrote on his Twitter account that the Holy Father prayed briefly before the Salus Populi Romani (Protector of the Roman People) image for the fruits of his journey. “On the eve of his journey to #Panama for World Youth Day, the Holy Father wentRead More