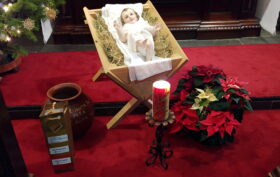 ORIGINAL SHRINE, Maria Fischer • First of all: It wasn’t us! When Father Pablo Pol’s message was spread about the letters sent to the Blessed Mother in the Original Shrine that broke the jar, many said to themselves, “But the last time we delivered letters via Schoenstatt.org the jar was still in perfect condition! This Christmas, just in case, we put the more than 750 letters in a paper bag, which was placed next to the old jar, which for the moment replaces the one that was broken. —  Read More