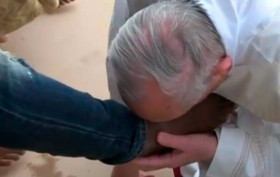 An act of peace

FRANCIS AT ROME • Pope Francis washed the feet of twelve refugees:  three Muslims, a Hindu, three Christian Copts and five Catholics (four men and a woman) during the Lord’s Supper that he celebrated on Holy Thursday afternoon at the Centro di Accoglienza per Richiedenti  (or CARA) Reception Center for those seeking asylum.  The center is located in Castelnuovo di Porto on the outskirts of Rome, where there are 892 at the center of which 554 are Muslims, 337 are Christians and two are Hindus. Mass was celebrated on theRead More