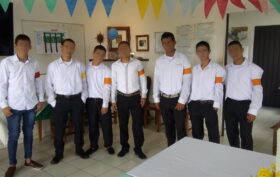 Posted On 21.12.2019In Mother of Tuparenda House, Schoenstatt - Reaching out, works of mercy

PARAGUAY, Ani Souberlich • “You are my beloved Son, and that love of God can move anyone to change many things”.  Pedro Kühlcke began his homily on the day when seven participants of CMT (Casa Madre de Tuparenda) received the sacraments. Josías received baptism; Emanuel and Angel received First Communion; and Rodolfo, Christian, Alci and Luis received Confirmation. As every year, thanks to catechists Oscar Sugastti, Ceferino Orué and Miguel Arrúa, the participants were able to get to know God better and they freely decided to receive the sacraments ofRead More 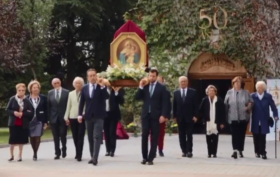 An Anniversary in 4.54 Minutes

SPAIN, Juan Zaforas • In a video almost 5 minutes long, the anniversary of the first Schoenstatt Shrine in Spain is made available to all of Schoenstatt, so that the gratitude remains alive for this blessing and grace for Schoenstatt in Spain, in which some could participate. —   The video, which summarizes the Golden Jubilee of the Shrine in Pozuelo near Madrid, was produced by Benji Arizu, the son of a couple from the first course of the Family Federation. Original: Spanish 02.11.2019 Translation: Lindsay Burger, Ohio, USARead More