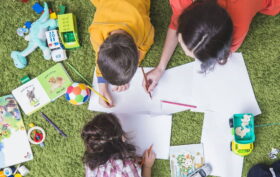 CHILE, with material from Maria Ayuda • In Maria Ayuda, one of the oldest and largest social projects in Schoenstatt, we work for the children and adolescents whose dignity and rights have been violated, to give them a good present and to assure them a better future.  For children and adolescents with name and surname, with history and future. They work for Scarlett. —     Scarlett is 20 years old and has a son of one. She was at Maria Ayuda from 2011 to 2018, and one of theRead More

Posted On 04.05.2020In Covenant Solidarity in Times of Coronavirus, Projects, works of mercy

ARGENTINA, Mercedes Verón, Director of the Casa del Niño Padre José Kentenich  • La Casa del Niño (Children’s House), a private institution, is in Florencio Varela, Province of Buenos Aires and was created on June 16, 1985, in the year of Father Joseph Kentenich’s centennial, from whom it takes its name. With the support of the Schoenstatt Apostolic Movement, little by little, with much effort and with the unconditional generosity of many people, this little house was built, which at this time gives 340 children between the ages of 3Read More