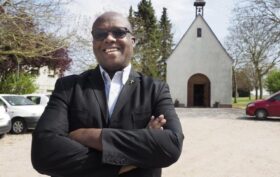 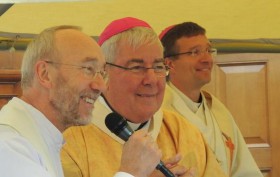 50th anniversary of the Shrine of Unity in the Dioceses of Cambrai – Greetings by Fr. Juan Pablo Catoggio

FRANCE, schoenstatt.org with material by Françoise Moniez, in: Doyenné de Cambrai • On 12 September 2015, the Schoenstatt shrine celebrated the 50th anniversary its inauguration, in the presence of the Archbishop of Cambrai, François Garnier; Michael Gerber, the auxiliary bishop for the Diocese of Freiburg in Germany; Fr. Micheal Hergl as the interpreter; and Frs. Fleury, François Triquet and Jean-Marie Moura from the Diocese of Cambrai. More than 200 people gathered in the open air to participate the solemn Mass – from France, Belgium, Argentina, Spain, Mexico, Brazil, as wellRead More