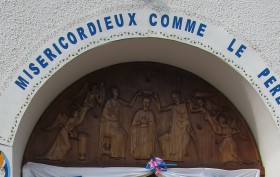 Opening the Door of Mercy at Mont Sion Gikungu

BURUNDI, Hermes Ntabiriho • “I have seen…I have heard…I know your suffering” (Exodus 3:7): This was the theme for the inauguration of the Jubilee Year of Mercy at the Mont Sion Gikungu Shrine, a ceremony on 20 December that was presided by the archbishop of the Bujumbura diocese, Evarise Ngoyagoye. The official opening of the jubilee year in Burundi took place on 8 December at the national shrine in Mugera in the archdiocese of Gitega, which brought together all of Burundi’s bishops and several thousand Catholics. Before the start ofRead More