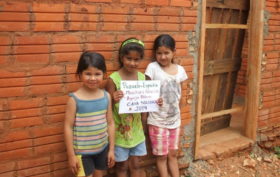 A small town of solidarity: 216 houses speak of Covenant Solidarity

PARAGUAY, Maria Fischer • “From the Shrine to the poor.” With this motto, João Pozzobon, the initiator of the Schoenstatt Rosary Campaign, built “Villa noble de la Caridad,” uniting Santa Maria Shrine with this town through the Stations of the Cross. — “From the Shrine, he especially wanted to help families; in his visits to homes, he was concerned about family situations, and later he tried to attend to their needs. In the same way, he portrayed a very preferential dedication to the poor and needy, to children, to thoseRead More 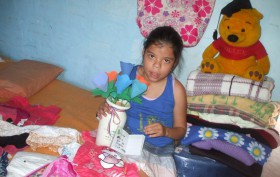 “I was a stranger and you welcomed me…” 100 houses of solidarity, a response to Pope Francis’ call

PARAGUAY, Maria Fischer and Ani Souberlich • “I want to be very clear. There is no social or moral justification, no justification whatsoever for lack of housing. There are many unjust situations, but we know that God is suffering with us, experiencing them at our side. He does not abandon us,” Pope Francis said in his encounter with homeless people in Washington. “Jesus not only wanted to show solidarity with every person. He not only wanted every person to experience his companionship, his help, his love. He identified with allRead More