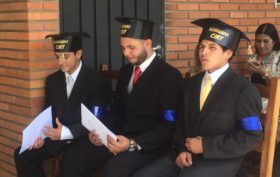 PARAGUAY, Ana E. Souberlich • On 10 December 1939, the Mother Thrice Admirable of Schoenstatt was crowned as Queen in recognition and gratitude for everything she had done throughout the first twenty-five years of Schoenstatt (see 2nd Founding Document, no. 42). From that moment on, the title of Mother Thrice Admirable, Queen of Schoenstatt remained. Since then, the Blessed Mother has been crowned many times. Fr. Kentenich himself crowned her in Dachau as Queen of bread, at a time when hunger was extreme and threatening. Today on 10 December 2018,Read More