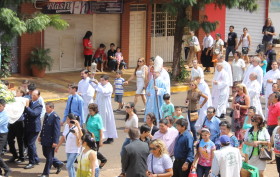 Encarnación Has Been Mission Territory, Today It Is Called to Be a Land of Missionaries

By Maria Fischer from Encarnación • The entire city of Encarnación, the “pearl of the south,” is celebrating. Posters, banners with the country’s and the Church’s colors are everywhere, the cathedral illuminated, a serenade by well-known artists: it is the eve of the great feast for the 400th anniversary of the founding of Encarnación, the city which bears the name of the great event which the entire universal Church celebrates on March 25th – the Incarnation of the Divine Word in the womb of Mary. “The Incarnation which we celebrateRead More