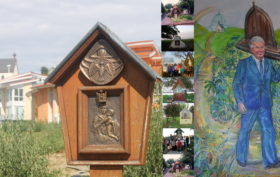 At the service of the life of the church: The Campaign linked to João Pozzobon’s Room already has more than 100 wayside shrines.

By Maria Fischer, with Ana Echevarría  and Mercedes Bonorino • It began with a wayside shrine; it was an incredibly simple wooden wayside shrine, with a plaque of the Mother Thrice Admirable of Schoenstatt. It is a wayside shrine, which on 8 December 1965, at the closing day of Vatican Council II, served as a fundamental stone for the symbolic blessing of the Schoenstatt International Shrine in Rome. A wayside shrine kept alive for decades, sometimes in great solitude and tested by fires, rain or heat, that desire and promiseRead More