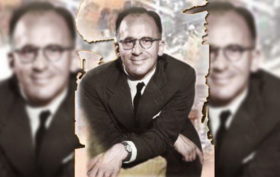 ARGENTINA, AICA • Businessmen who are saints? Businessman, manager, executive as a Christian vocation? Development of a new social order from economics? The Holy Spirit says yes, through the real story of Enrique Shaw, an Argentinean businessman. Joseph Kentenich says yes with the idea of everyday sanctity. The prefect of the Congregation for the Cause of Saints, Cardinal Angelo Amato SDB, celebrated Mass for Servant of God, Enrique Shaw, this Sunday at the Metropolitan Cathedral to commemorate a new anniversary of the death of a person who could become theRead More 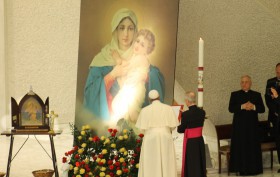 Posted On 24.10.2015In Covenant solidarity with Francis

Looking Back on Pope Francis’ Message to the Schoenstatt Family — Part 4: Society and New Social Order

By Sarah-Leah Pimentel, South Africa, member of Schoenstatt.org`s editorial board • There is not a lot of good news these days. Turn on the television and you hear about Syrian refugees being denied entry to Europe, civil strife in Palestine, Burundi, and Burkina Faso, families torn apart by gang and drug violence in Mexico and South Africa, extremist terrorist groups laying waste to parts of the Middle East and Africa, human rights abuses in Myanmar, Paraguay, and Angola. How do you find hope and joy? The question that the SchoenstattRead More