The General Council of the Schoenstatt Fathers visited the Church of SS. Salvatore in Onda

ROME, ITALY, via sac.info, Casa Generalizia della Società dell’Apostolato Cattolico • Every Wednesday, the Pallottine Family in Rome gathers around the altar of St. Vincent Pallotti to pray together. 2nd December 2015 was a special day because, together with the priests, brothers, sisters and lay members of the UAC, were present also the Superior General of the Schoenstatt Fathers, Fr. Juan Pablo Catoggio and all the other members of his General Administration, elected on 22 August 2015. The Holy Mass was presided over by Fr. Martin Manus, General Consultor. InRead More 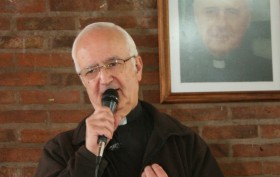 Today: P. Alberto E. Eronti answers: He is from Florencio Varela, Argentina, and he is a first generation Schoenstatt Father in Argentina • Six months into the pilgrimage through the second century of the covenant of love…what is your dream for this Schoenstatt in who we are and where we find ourselves in the Church and in the world, and in our mission? If, as some affirm, Schoenstatt’s first century was a time of founding, structuring and consolidation; at least at the beginning of the second century, we should accent theRead More