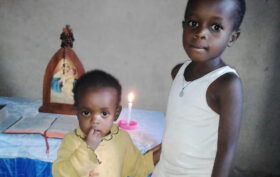 UGANDA, Jean de Dieu Ntisumbwa • The Pilgrim mother Nr.  58 of the modality of “Founding” arrived in Uganda, arrived in Uganda on the 15th august, 2019. This picture of the Pilgrim Mother blessed on 21st may, 2016 in the national shrine of Argentina, is the only one present in Uganda. —   The first and only Pilgrim Mother in Uganda, is working in the Nakivale Parish in the district of Isingiro – Africa`s oldest refugee camp. From here, the coordinator and missionary, a refugee from Burundi, asked the staffRead More 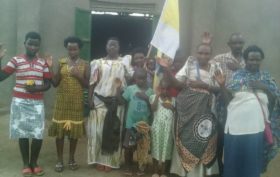 UGANDA, Jean de Dieu Ntisumbwa/Maria Fischer • Nakivale refugee camp is a settlement located in the Isingiro District of Southwestern Uganda, and it hosts more than 100,000 refugees From Burundi, the Democratic Republic of Congo, Eritrea, Ethiopia, Rwanda, Somalia, Sudan, South Sudan and so-called “mixed people”… It is here, where Jean de Dieu Ntisumbwa, a Schoenstatt member, a refugee from Burundi who left his country but not his Covenant, founded Schoenstatt in Uganda. On March 3rd, a Pilgrim Mother picture coming from Argentina, blessed in the National Shrine in FlorencioRead More