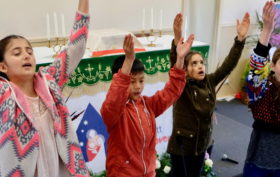 AUSTRALIA, Sr. Julie Brcar with Melissa Janknegt • “It was a miracle everyone was fed!” Sr. Julie Brcar remarked happily, following a day of celebrations at the Schoenstatt Shrine in Mulgoa on 16 July, marking 75 years since the founding of the Schoenstatt Family Movement. A combined celebration uniting families from other continents including Lamar, Texas, USA, Santa Maria, Atibaia, Londrina, and other locations in Brazil, and from the least likely place on earth — a place of death, hunger, violence, and atrocities— the site of the former Dachau concentrationRead More